Ideally, when you are working on HoloLens or other Mixed Reality projects, you have a full time designer on call in your team handling all the nastiness around models, and who knows how to handle Maya or some other high end design tool - preferably with valid licenses. Otherwise, you are in the same boat as me. You simply download models, and change them to your need yourself, using Blender.

Blender can do everything and the kitchen sink, is open source and free. Beggars can’t be choosers. But if you are like me - a developer set on reaching goals, and not a graphic artist at all, Blender’s UI looks like a Rube Goldberg machine crashed into a wall at high speed. There’s little buttons everywhere, with no apparent logical grouping based on task or flow. In addition, most of the tutorials are long videos by well meaning designers babbling endlessly while pressing hot keys ‘everyone knows’ without explaining what keys they are, and since the UI was recently redesigned, most of it is outdated, too.

I don’t aspire to become a graphic artist or to get to understand Blender on a deep level, I just want to do some basic stuff. If you are like me - a developer just needing to do some small things with models - this article is for you. I am just explaining a few simple how-tos, without magic keys - step by step. There will be more, later.

For this blog post, I am going to use a sample model from my HoloLens app - a helicopter - that had several problems, which I am going to repair with Blender. Blender 3.0, that is. If you are wondering why every chapter has “in Blender” behind it - that’s to make it easier to find by search engines. I have spent too much time searching for stuff. 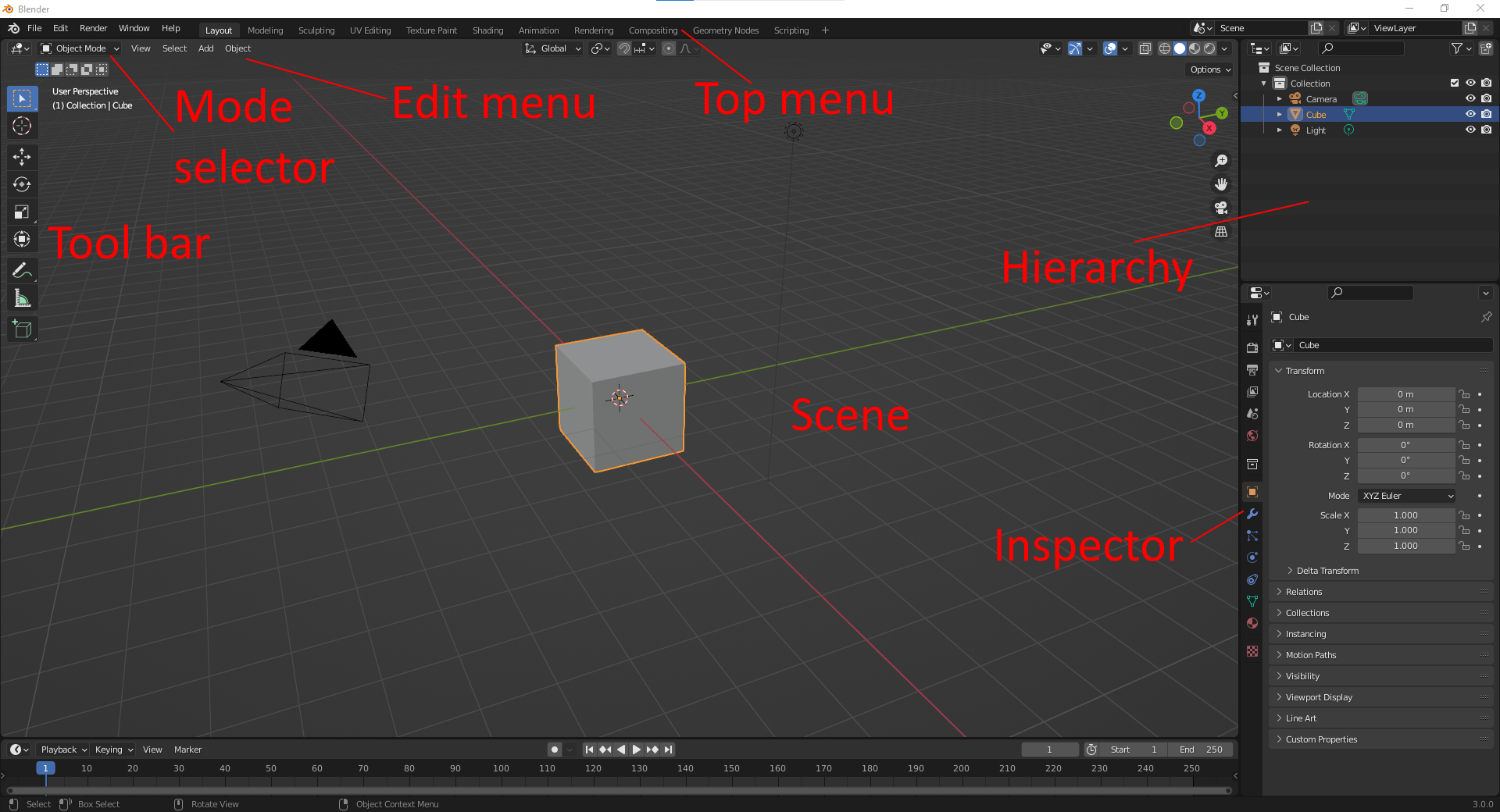 I have no idea how these things are actually called in Blender lingo, but in my mind I call them this like in the image. If you are coming from Unity, like me, things on the right and the middle look more or less familiar and I nicked part of the naming too.

Cleaning out the Blender scene

Importing an existing model into Blender

This is an easy one: click File/Import in the Edit menu and choose the type. Like I wrote before, I imported an helicopter model - an FBX - I used in AMS HoloATC that has multiple problems. 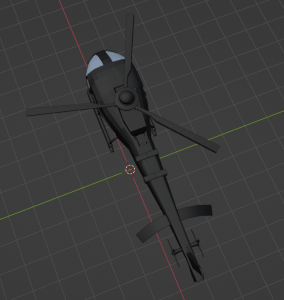 Moving an object in Blender

The helicopter will now be adorned with three arrows. 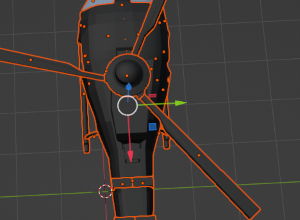 Rotating an object in Blender

The helicopter will now be adorned with three circles: 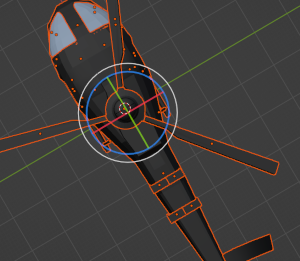 We want to rotate the nose to the left, so we carefully position the mouse cursor over the blue circle (x marks the spot), press the left mouse button and slowly move the mouse. If you press the CTRL key while doing that, you can snap to small increments and you get this compass rose ring: 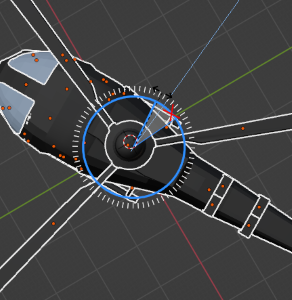 Deleting part of an object in Blender

Assuming the object consists out of separate parts, this is very easy. 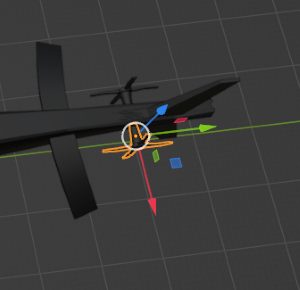 Changing the pivot point of an object in Blender

The left pointing rotor is pretty badly aligned. We want to rotate it, unfortunately, it’s pivot point (the orange dot) is about halfway the blade. 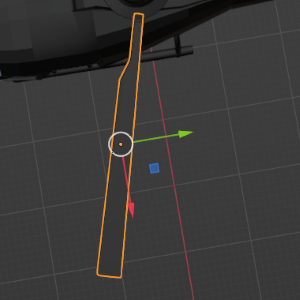 This makes putting it in the right place a cumbersome procedure of moving and rotating. It’s easier to change the pivot point first. 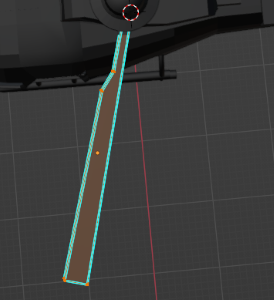 Now carefully zoom in to the point where you want the new pivot point to appear - the location where the rotor is attached to the rotor axis. Click at this location in the middle of the rotor: 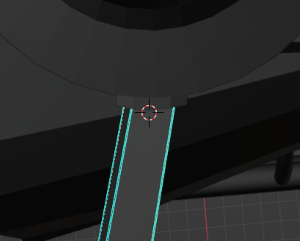 And you should see the ‘3D cursor’, as it’s called, appear in that location.

And boom. The pivot point is set. 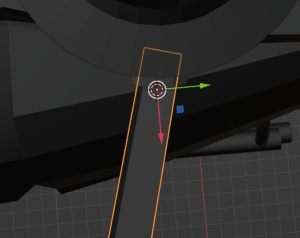 Now if you zoom out a little, and select the Rotate tool, you can easily make the rotor look less warped: 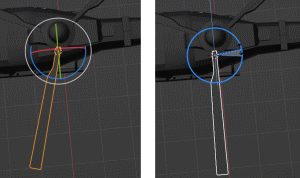 Joining multiple objects into one in Blender

We want to make the rotor to be able to spin, but now it’s three separate object.

Hold down the shift button, then click all three rotor blades and the center axis: 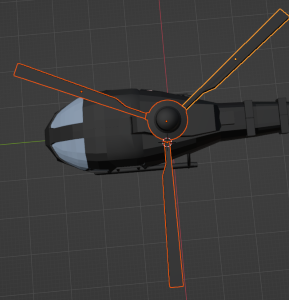 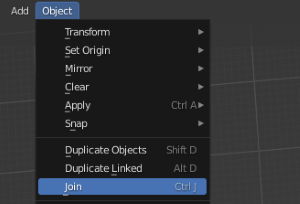 And presto. Unfortunately, the pivot point is way off again 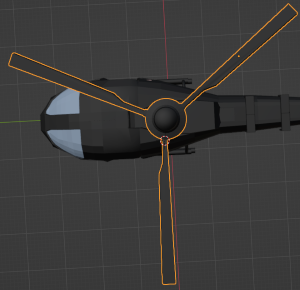 But I have already explained how you can fix that.

Changing color of objects in Blender

Nearly the whole helicopter is black. We want to changes this into a more gray color.

This will show something like this in the Properties pane: 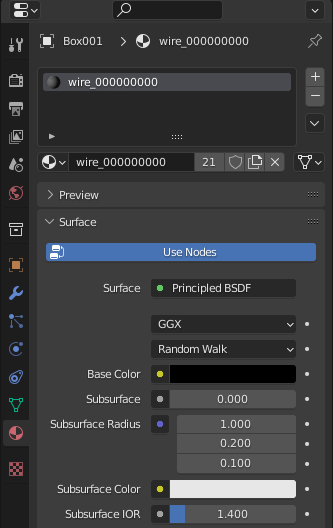 I always press “Use Nodes” as this makes the UI simpler and colors easier to set. Don’t ask me what it means: 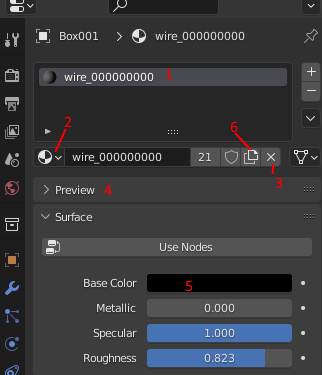 I have annotated a few things of interest

So I clicked the color picker (5), clicked “RGB” because I am too simple a man to understand what HSV is, put the slider a little bit up and the whole helicopter turned battleship gray - except for the windows. 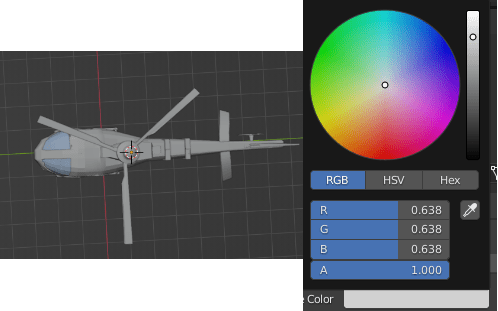 Now if you want to give for instance the landing gear a different color. Select one of the sled and then you click the button marked 6 - the double pages symbol. This will create material “wire_000000000.001” but you can simply rename it. I renamed it ‘sled’

Turning stuff off temporarily in Blender

There is a little eye icon next to it. If you click that, it turns the whole fuselage invisible, without deleting it. This shows the person who designed this helicopter, apparently found it necessary to design part of the interior as well. 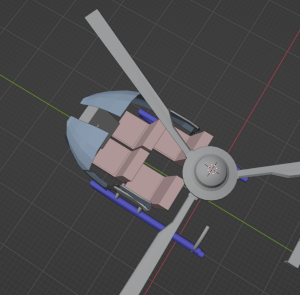 We can now safely delete this without having to worry about the fuselage: 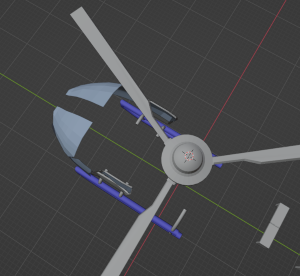 And then turn on the fuselage again with the eye-icon in the hierarchy.

There’s more stuff I could share, but this is a nice start to get you going doing some basic stuff in Blender. This is as good as my notebook as your source of information. If you would like to see the files I played with during this post or maybe try to do this yourself, you can download them here.