Time to rock and roll

All right my friends, it’s time to show the heart of the matter – how to read data from an Azure Mobile App Services data service and make the airplanes appear in the right places.

As the projects are partially regenerated, and have a total different .NET baseline, I have not found a good way to share classes as binaries between full .NET code and Unity without getting in all kinds of trouble, so I choose the easy way out: I took

from the FlightDataService\DataObjects, moved them the App/Scripts/DataObjects folder in the Unity project. Then of course the service does not compile anymore, but I added the moved file as link. Then at least we have once source of truth as far as these classes are concerned.

Then we need a simple class to hold a list of flights with a timestamp (add that to the DataObjects folder as well):

Adding a DataService to read data

I opted to add the DataService as a Singleton that can be accessed in the app. But we have a bit of an issue here -  Unity runs on Mono, e.g. .NET 3.something, and does not have things like packages for reading App services, or support async and Tasks and stuff. But remember – a HoloLens app is a two stage rocket. Unity does not generate an app for the HoloLens, but an UWP project, and that UWP project can use all the goodness from all the latest stuff. Meet the simple way to close the gap - my new friend UNITY_UWP.

Code between #if UNITY_UWP – #endif blocks is invisible to Unity – but will be accessible in the UWP HoloLens app that is generated by Unity. You will see Unity swallows it – no problems at all. There is only this tiny thing – you cannot add NuGet packages to Unity. So we have to do that in the UWP app, in Visual Studio. But… the UWP app is generated from Unity by File/Build and overwritten. The trick is to know not the whole app is overwritten, but only part of it. What I did was the following: Adding the AircraftLoader to create and update aircraft

I have created one class that is actually responsible for actually getting the aircraft data from the DataService – and one that is responsible for creating, updating and deleting aircraft. The updating – moving to a new position – is handled by the AircraftController – basically all the AircraftLoader says to the airplane is ‘here is new data for you – handle it’

Remember – it’s always best to start in Unity. So create an AircraftLoader and an AircraftController script in Assets/App/Scripts. Then proceed to double-click on AircraftLoader. This will open a Visual Studio instance. Be aware – this is not the project your will be running. This is the other solution, the one that is in the project root – I call this the ‘Edit’ solution. First, we are going to make sure the “usins” of the class are properly organized – that is, in a way that doesn’t make Unity go belly-up:

Then we are going to add a whole lot of fields. And yes, some are public. These are things that can be set from the Unity editor. I have talked about that before.

And then there’s this little method – that is used as callback for the DataService’s GetFlight method:

In short - when the data received and it is ok, just add it to the queue of received data. And then let Update handle it. As a matter of fact – like this:

First it finds out if it’s necessary to download new data, but downloading and adding happens asynchronously. Then, if there’s any data in the queue, it first makes a list of all the id’s in the newly received flights.

It’s not that hard, see ;). The methods for creating, updating and deleting aircrafts are not that hard either.

The CreateAircraft is the most interesting – it instantiates the aircraft game object, makes the HoloGramCollection it’s parent, passes the actual flight data to the object, and adds it to the dictionary of aircraft game objects using the flight id as the key. Oh, and it also sets the scale to 0, making the plane effectively invisible. This is because, without setting a location on instantiation, the aircraft will appear on 0,0,0 before – where in future episodes we will place the center of Schiphol, very near the tower, and that’s not a place where aircraft belong.

UpdateAircraft just sends flight data to the game object, and DeleteAircraft – well, deletes it. There is only this matter of SetNewFlightData:

But that has the actual method that moves the flight data to the AircraftController commented out, because that does not even exist. What is worse, the Aircraft does not even have to component. So let’s head over back to the Unity Editor.

Wiring up some stuff in Unity

First of all, we drag the DataService and AircraftLoader Script from the App/Scripts folder on top of the HologramCollection’s inspector page. Then we drag AircraftHolder prefab from App/Prefabs on top of the AircraftLoader’s “Aircraft” property. Net result should be this:

Please make sure the Data Url property of the Data Service indeed points to the place where your data service as created in the first post is published. Save the scene, then rebuild the app with File/Build settings etc. Go back to Visual Studio once the building is finished.

Having programmed OO since the start of this century, I tend to put control where I logically think it belongs, so rather than programming the ‘flight logic’ into a class that loads and translates data too (the AircraftLoader) I opted for putting it into a separate class that would be part of the game object. I tend to conceptualize these combined game objects and components as OO objects - although that is not completely right, it helps me think about it. The start is simple enough

A few private fields to retain some data.

I like to write the code at high level as almost self-explanatory. First we determine if the aircraft needs to be moved, then we ingest the data, and extract speed and heading. Then, when the aircraft needs to be moved, change it’s location, if not, just update the label. The ExtractSpeedAndHeading is pretty straightforward. There is only the thing with heading - that sometimes comes in a negative value, and although Unity3D has no problem with that in positioning the aircraft, I think it looks ugly in the label. So I make sure it's always positive.

SetFlightText is also rather trivial

Just some clever formatting to prevent empty postfixes like km/h and degrees in the label. By the way – stick to ye olde string.Format and don’t be tempted to use C# 6 string interpolation or you will be sorry (unless you put it between “#if UNITY_UWP – #endif). Anyway, on to the next routine, that actually does all the aircraft manipulation:

It sets the text too, then set’s the location based on the flight’s location, and set rotation based upon the heading of the aircraft and whether it’s going up or down. Notice I use local position, heading, and scale. This means all those things are relative to the position, rotation and scale of the containing GameObject – HologramCollection. This has the advantage that I can move, rotate and scale the containing object and in one go everything that is in it follows suit. So you don’t have to do all calculations for that – Unity takes care of that form me. I don’t use it in this app just yet, but the actual app already has some experimental code to do that (although that code is not yet in the store version).

Also, note the fact the airplane gets it’s size here (when it’s created it’s 0,0,0). I have the feeling the model is actually a 1:1 scale representation of the actual aircraft – the first time I saw it with the HoloLens I could not find it at first, then turned around and had a “Glimly Glider experience” - a giant aircraft silently swooping down on me from what looked only 10-15 meters. I decide to scale it down to 0.0015 of it’s original size so it appears to be about 10-15cm in a HoloLens – a size more beneficial for getting an good overview, not to mention the blood pressure and heart rate of the average user ;).

Next up are these two routines:

I already discussed the how and why of scaling the down coordinates 15000 times in horizontal direction and 2000 times in vertical direction in a recent blog post about converting lat/lon/alt coordinates into the Unity3D X/Y/Z system, so I am not going through that again, because the next part is a lot more interesting. First I will show the last method, GetVerticalAngle

I found that the data, although it provides information about whether the aircraft is actually ascending or descending, that data is not always correct. So I decided to calculate that myself, based upon the difference between the current location and an older location. Now since an aircraft usually descends a lot slower than it takes off (which is very fortunate for the passenger’s – or at least my – peace of mind) this method basically returns –20 when the aircraft is going up, and 10 when it’s going down. And then we get some beautiful Unity3D math again – or more accurately, methods that prevent you from having to use all kinds of advanced 3D math: 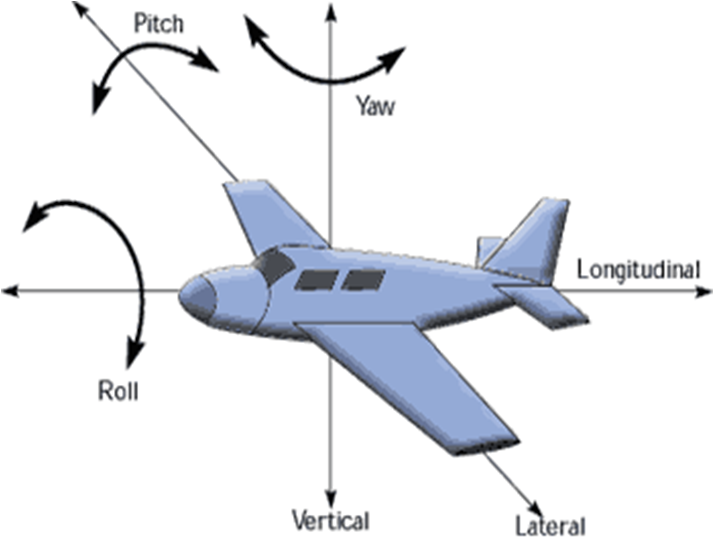 Try to picture in your mind how this works:

You use summarize Quaternion.AngleAxis(angle, Vector3.<the axis you desire>).eulerAngles over multiple axes to get the combined rotation of an object and assign that in one go. Hence you see in SetLocationOrientation() the statement "transform.localEulerAngles = GetNewRotation();"

Because we have implemented that in the previous section. Then there’s is the method LocationEquals in Coordinate, that we used in AircraftController but that was not implemented yet ;)

And if you run this in a HoloLens or the Emulator, you will see aircraft! You will notice they won't move through the air but jump from position to position. They also don't show their track, there is no Schiphol Airport map, no ATC tower, no church, no gaze cursor - and you cannot select anything yet - but that is because this post is long enough as it is. The base is here. 3D visualization of a JSON stream. What is left, is basically making things more slick :)

In hindsight I might better have splitted this episode in two blog post still, but I hope you have made it to the end. I feel this blog post is the heart of the matter – reading a data stream and turning it into a 3D model – making ‘dry records’ come to life, almost literally. I also showed you some key concepts about positioning and rotating stuff in 3D.

As usual, the code is here on GitHub.