After my first smartphone – my honored Windows Mobile 6.0 and later 6.1 powered Samsung i780 – I got hooked on smartphones – with a physical keyboard. Don’t get me wrong, touchscreens are great for navigation, but if you are, like me, trained in ‘blind touch typing’ and in addition are blessed with a carpenter’s son hands, typing anything more than a few occasional words becomes an excruciating experience. Unfortunately, a certain company from Cupertino made made virtual keyboards into high fashion and although their keyboards are very good I never got more than 50% correct typing at a reasonable speed. I will not talk about trying to use the virtual keyboard on a HTC Hero Android device. I still dream of it, sometimes ;-).

Anyway, fast forward February 2010, the presentation of Windows Phone 7, I saw two devices with a physical keyboard, the LG Quantum and the Dell Venue Pro, and I knew I was going to one of those. Wrong. The LG never made it to Europe – allegedly because of EU regulations about radiation. The Dell Venue Pro looks like something from a science fiction show – and apparently is, for although it appeared for pre-order at several suppliers from the UK as early as November 2010 it has yet failed to materialize. At February 2, almost a year after the initial presentation I cancelled my order for the Venue Pro at Clove UK. On February 7, I received an e-mail that the HTC 7 Pro had become available. Today it arrived. The long wait is over and I can say goodbye to the prototype LG, so graciously supplied to me by Microsoft.

It’s physical dimensions are 11.5 x 5.5 x 1.5 cm and it weighs about 190 grams. It’s a bit on the heavy side, but it feels reassuringly solid. The weight is not without reason for there’s quite a substantial battery in there, as well as its European USP, a slide-out keyboard. Personally I don’t care about the extra weight in that light. You can find quite a bit of pictures of the HTC 7 Pro on the internet, but a review would not have been complete without mine: 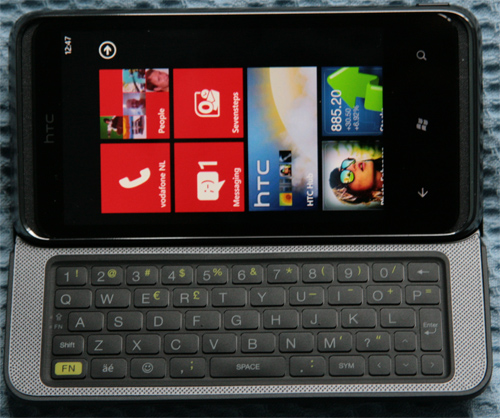 The keyboard sports five(!) rows of keys. The keys are nicely spaced, give very little resistance but are not wobbly at all and provide a smooth typing experience. The top row is far enough from the actual screen so your thumbs won’t bump against its edge (which I experienced typing at a Omnia QWERTY) and five rows means you can type characters as well as numbers without having to resort to shift or fn keys. There is a large space bar and an enter key, a full set of cursor keys, point and comma have their own key and other often used stuff is easily accessed with the FN key. I like the fact that even the underscore is directly accessible from the keyboard - a nice geeky touch. Notice the hardly visible dots just left of the “FN” text left of the A. These are actually extremely tiny but very bright white LEDs that will light up if you use the Shift or FN key. Pressing either of these keys for a little longer make it act as Caps Lock  and FN-lock (whatever). I think this keyboard will serve me very well. The only thing I would have done differently is make a bigger backspace key. You tend to use this quite a lot ;-)

No AMOLED here folks, but nevertheless bright, vivid and smooth. When seen from an angle of 45 degrees the black seems to become gray and blue goes a little green, but it works for me. I think I will need to have a side-by-side comparison with an Omnia 7 to give a real opinion about this. [Update: I did do the compare, and I must say: compared to the Omnia the screen is really pale, but that's AMOLED for you. But it also is quite pale compared to my wife's LG Optimus 7 screen. So apparently HTC cut a little on the costs of this specialized device by putting in a lower quality screen. I know for a fact the first batch of HTC Trophy suffered from this same feat]

Yeah, I still do that occasionally. My wife reported good and very crisp sound from her venerable old Nokia (pun indented) and I did get good sound likewise. I have not been able to detect any antenna gate like effects, but so far I made about two calls with this phone so you never now ;-) 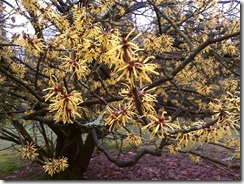 Let’s say it’s good but not great (Click to see full picture). So far I took only a few pictures with it. I am used to Canon EOS 400D DSLR picture quality so this is no match anyway. I think the picture of this Witches’ Hazel is pretty good, but the results were varying. There is a led flash, which is quite good, but I don’t think it’s a good camera to shoot the standard “drunken group hug in the pub”-pictures. But then again, you mind want to reconsider using a pretty expensive device in that kind of circumstances.

It’s a good music player, and then the Sound Enhancer come into play. When you plugin the headphone (which you do, for you don’t want to bother your fellow human being with your particular choice of music, eh ;-)? ) , the sound is quite thin –  until you start playing with Sound Enhancer. The “bass booster” setting gives quite an impressive thunder. I used it to play a Youtube video – without headphones, ahem – and my wife commented about the good sound quality.

Other hardware – and concerns about that

The back cover is solid metal and unlike a German review I read stated, it’s very easy to open. That is, provided you take the time to read the manual, in which the correct procedure is quite extensively described: first slide out the keyboard, that reveals a notch, put your fingernail there and then you easily pop open the back cover. No messing around with screwdrivers or knives. Remove battery, insert SIM card as depicted in manual, replace battery and cover, ready. Should take less than a minute.

The device sports quite a big volume rocker on the left side that is easy to operate. The power button is on top, and is a bit small for my taste, but it works. The same goes for the camera button on the left bottom – small but usable, and easier to find than the power button, The standard Windows Phone 7 Back, Start and Search button are not buttons at all but virtual buttons – you have to so much as touch them and they are activated. Which, I think, will mightily annoy game fans because sooner or later you will inadvertently hit such a button and poof goes your game. For me, it will take some getting used to, but that’s okay. There is a headphone plug and a Micro USB port – placed  on the side, the place where I like it most. I would have liked it even better on the other side, for now it is sitting on the ‘front’ side when the slider is open.

My biggest concern with this device is the slider mechanism. The slider itself feels solid enough, but once slided out the screen flips up. It looks cool, the phone looks like a miniature laptop top but that flip-up mechanism feels a tad vulnerable – I wonder how much durability tests went into that and how long it will last. Time will tell. [Update: the flip-up system makes it possible to put the device rock solid on a table and use it as a ‘dining table top’ Youtube player, or scroll through tweets or news and even typing with my left hand. Seen from that perspective the fact that the back button is a virtual button is very handy – you now only have to touch it a little and it activates. Pressing a physical button would make the device device topple backwards]. [Update 2: in 3 months the device has suffered two bad drops with the slider open, and although it fell apart in three parts (phone, battery pack and battery cover) it apparently suffered no ill effect. So the slider/flip-up mechanism apparently is pretty solid]

Also included in the package I got was a Bluetooth headset. Not that I needed one, but nice, still.

Whether you like it or not, it runs Windows Phone 7. You may have noticed I like that fact very much indeed, as well as the fact that it runs Windows Phone 7 like it’s on steroids. The animations are very smooth after living on a prototype for over two months. There are some extra things aboard, like the HTC Hub which I haven’t even fully explored yet but which seems to include some weather gadget, a Youtube player, the already mentioned Sound Enhancer. In addition, a Photo Enhancer, a unit convertor (sorry Maurice) a Connection Setup Wizard and some other applications seem to be pre-installed. HTC also seems to have included a lot of ringtones that weren’t included on the prototype so I guess they are extra too.

Impatience has a price

As I wrote earlier this device comes from Clove UK. You can see this on the keyboard – there’s a Pound Sterling sign in stead of a Dollar sign. I don’t care about that. What I do care about is that both the phone and the headset come with a separate charger – both only support UK style wall sockets. I guess it’s the price I pay for my impatience, but then again, if you ship to the European mainland you should at least point this out to your customers. Even better is a link to ‘order your convertor plug here’ – and best is to include a convertor plug free of charge (in stead of a head set). Anyway, I went to the phone shop on the corner and forked over €18 for a standard HTC Micro USB charger. Since I now don’t have to buy an extra USB cable I am only about €10 down, but still, it feels a bit inconsiderate. Anyone from the UK interested in two Micro USB chargers? You can get them from me ;-)

After a fellow #wp7nl developer’s disastrous experiences with the HTC Tytn II I grew a bit weary of HTC. So why did I buy this device? Three reasons:

So I bought HTC, because there was simply no competition. I hope phone manufacturers will take note of this. I am not alone in preference 2 – just watch all the youngsters walk around with BlackBerry devices. My advice: stop aping the iPhone, and corner that part of the business before RIM gets everything.

Anyway: what I’ve seen from the HTC 7 Pro – it feels good, it runs smoothly, and now I have a Windows Phone 7 device on which I can do some serious development, with a seriously usable keyboard that I can use for making notes, posting messages and blog comments, and boring you all on Twitter till the cows come home. I’d rather not think about the fact that including the charger I shelled out about €560 to finally lay may hands at a phone that meets my specs, but for now I am very satisfied with this device and in the end, that’s what counts for me.