You might have heard it – the Mixed Reality Toolkit folks are busy with a major rewrite. The original MRTK was intended to accelerate applications targeted toward HoloLens and (later) Windows Mixed Reality immersive headsets. The new version “aims to further extend the capabilities of the toolkit and also introduce new features, including the capability to support more VR/AR/XR platforms beyond Microsoft's own Mixed Reality setup”.

I’ve been quite busy but finally found some time to play with it. And while I am doing that, I am going to shoot off some smaller and bigger blogs about things I learned – both for myself to remember and you to enjoy.

This is a pre-release version and is not feature complete.

So let’s dive in. In this first blog post on this subject, I will simply describe how to set up an empty project.

Cloning the latest MRTK-vNext from GitHub

This is pretty standard procedure. I prefer to use TortoiseGit for this, as I seem to be of the dying creed that’s not particularly fond of command lines. The repo is here (as it has been for a while)

Also fairly standard. You will need Unity 2018.2.18f1 for that. Or, by the time you will read this, probably an ever newer version. After you have created the project, close Unity again.

Adding the MRTK to you project

From the MRKT repo, copy the following folders and files to the assets folder of your project:

Configuring the MRKT-vNext components in your scene

Configuring the MRTK has become a whole lot easier.

Now Unity starts to complain about there being no camera tagged as MainCamera. This can easily be fixetd by tagging it manually:

Basically you know have an empty project

you will see this this appear in the inspector 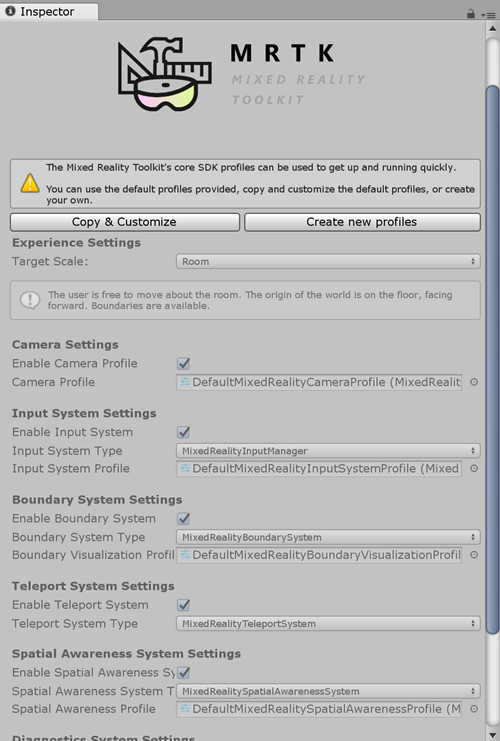 Make sure to check that the new profile is actually applied:

You will now see that the settings are no long greyed out, and now you can change and swap out components. 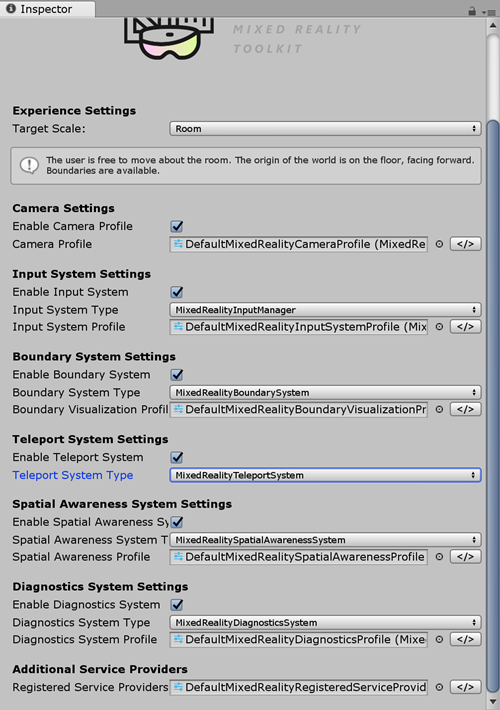 We have taken the first (very small) baby steps into configuring the MRTK-vNext. We actually did not write any code and therefore, unlike most of my other posts, this does not come with a sample project. The next one will, though.