Ever since I knew the HoloLens was coming to my company I have been digging into all the online resources I could find. And ever since the devices arrived on June 8th, I have been more or less pleading insanity with my wife, as I spent quite some spare time just trying to get ever deeper into HoloLens development with Unity3D and C#. What surprised me most was how easy it was to actually get started and get on with it, and get a pretty functional app within a quite short amount of time – with shockingly little code.
I will write the way I created the app as a series of blog posts (and not a single one) to prevent individual posts from becoming too long. They will serve both as an educational piece for those interested in HoloLens programming (as working examples with explanations are still pretty rare) and for myself – to remember how I actually came to this.


Description and features of the app

The app creates a grid of cubes floating in the air. Up and sideways it’s a fixed number of cubes (4x4), the number in depth is determined by the space available between you and a wall or object you are gazing at. The grid is also rotated in space according to your head’s position, so if you tilt your head a and gaze up to the left, so will the grid be tilted and stacked up to the upper left. In other words – you will always look at a grid that is exactly aligned with your gaze – when the grid is created. After that you can walk around it and manipulate it to your hearts content:
An additional feature, handy for demo’s – if HoloLens cannot find a point on a wall or object while trying to create a grid in 10 seconds (because it’s still scanning the room, or there simply is nothing in front of it) it will pick a place in front of you about 3.5 meters before you and assume that to be the wall. You get a fairly small grid then.
I have shown some intermediate stages of the app – here it is in it’s final form.

And I am going to show you how to build it. It’s 90% Unity3D stuff, and very little custom code. And part of it is nicked from Microsoft, too. Actually I only wrote three  classes all by myself.

If you are totally new to Unity3D (like I was) I would strongly suggest doing some introductory stuff first. Otherwise, I will be talking mostly nonsense to you. Start out with the Creative Coding series by the brilliant Rick Barraza. I found it very enlightening, although it is slightly off target when you are a hard core coder like me – Rick is talking at length at things you will find elementary as a coder, while some Unity3D concepts go by at a speed that made me pause and go back a few times ;). But it is a very good series to make you feel comfortable with Unity3D editor and the basic concepts. I would also suggest a few lessons on the Holographic Academy to get you familiar with HoloLens interaction programming. I would particularly suggest lessons 101 and 101 (or 101E, if you don’t have a HoloLens). It’s rather amusing to see that the Academy series is heavily slanted toward coders, while Rick is more slanted toward designers, so together they make a good introduction.
For editor layout, I took Rick’s suggestion of taking the “tall” layout (Window/layouts/tall) so that is what you will see in the screenshots. It is not the default Unity3D layout.

The most important part – think of a good name, as it’s not easy to change it. I would strongly suggest following a few steps as described in my fellow MVP Morten Nielsen’s blog, most notably:
I tend to do a few things different:
At the moment of this writing, I got some errors importing the HoloToolkit in the Sharing subfolder. As we don’t need this anyway, I deleted it completely.
I also add a few things up front:
So, if you are done following Morten’s steps and my additions/changes, you should end up with the following: 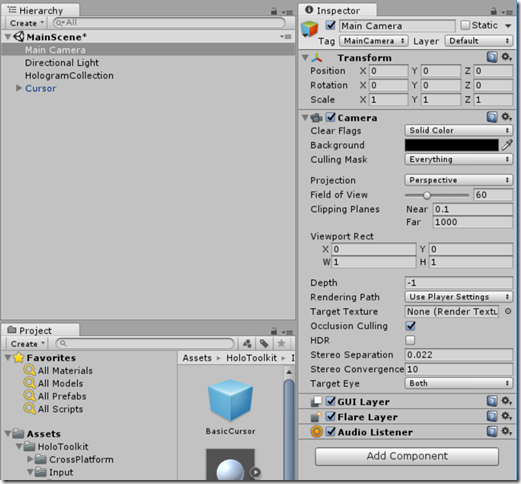 When you are done with this, hit “File/Save Scene” and choose a name you like. I tend to choose “MainScene”.


A little organization up front

I like to keep things a bit organized, so I keep stuff I made myself and/or is part of my app) apart from 'the rest', that is, the HoloLens toolkit. This makes updating easier. So I created a folder "Custom" in my assets and added a number of sub folders to it: 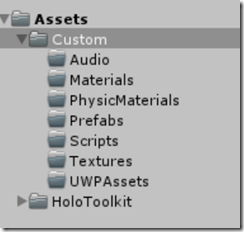 Click “HologramCollection” in the hierarchy pane, right-click, select 3D-object and then “Cube”. Done ;). You get a white 1x1 cube, that’s a bit big and a bit boring. So what we are going to do next is get a material for it that has a more interesting look. I guess I wanted to impress our CTO (hi Danny ;) ) so I took a Wortell company logo - that is conveniently square. But of course you can take any image you like. In Unity3D terminology, that’s a texture, so I dragged that image into my newly created textures folder. But you cannot directly use a texture on a 3D element – you need a material.
So inside our Assets/Custom/Materials folder we right-click, select Create, then click “Material”. In the top of the inspector, a drop down box is shown labeled “Shader”. Change that to Mobile/Bumped diffuse. The UI below it will change – you will see two grey areas. Hit the “select” button from the top one, select the image you want from the popup, and you are done. Alternatively, you can also drag it from the textures folder on top of the grey area. Either way, the net result should be this: 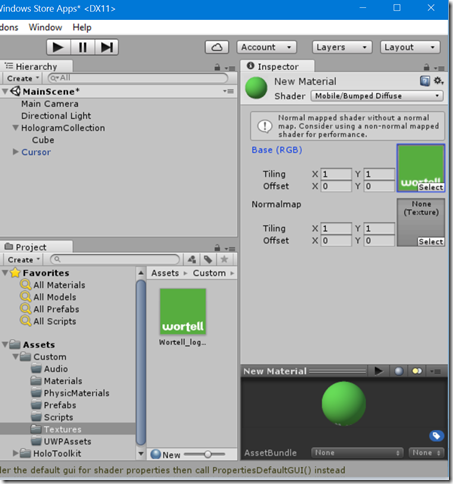 It gives some warning for better performance – people who understand Unity3D better than me will no doubt have suggestions to fix this. For now, it will work. But your material is now still called “New Material” – I renamed it to “WortellLogo”.
Now select the cube in the Hierarchy pane, open the Assets Custom/Materials folder and drag the new Material on top of the Inspector pane, just below the Material 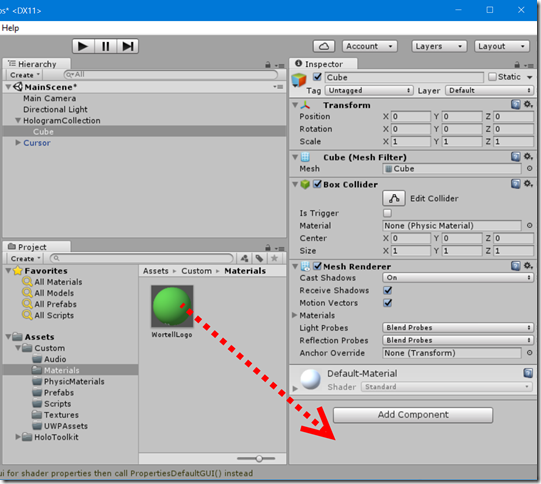 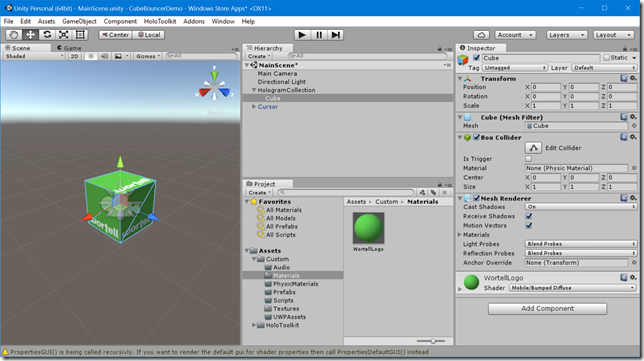 One cube, with logo, nearly done. We will need only need change one more thing – the cube is a wee bit big. Under transform (on top of the inspector) change the Scale to 0.1 for X, Y and Z.


Adding some physics (and other) components to the cube

To be able to make the cube be moved and controlled by the Unity3D physics engine, we will need a component that describes it’s physical characteristics. That component is called a “Rigidbody”. So hit the “Add Component” button to the right in the cube Inspector, type “rig” in the search box to make finding the right component easier, and select Rigidbody. I have changed some default settings, but you are free to play with your own – the most important thing is to turn off “Use Gravity” 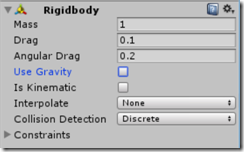 A second part of the physical characteristics is defined by the physical material. This, apparently, defines how things collide – how bouncy they are, and how smooth. You can image two ice cubes sliding over each other showing different behavior than two rugged wood cubes. Anyway – select folder “PhysicMaterials’', right-click, and select Physic Material. I have called it “BouncyStuff”, but you may call it whatever you like. I have given it the following settings:

To apply this material, you will need to drag this material on top of the “Material” box of the “Box Collider” inside your cube, that was created by default. 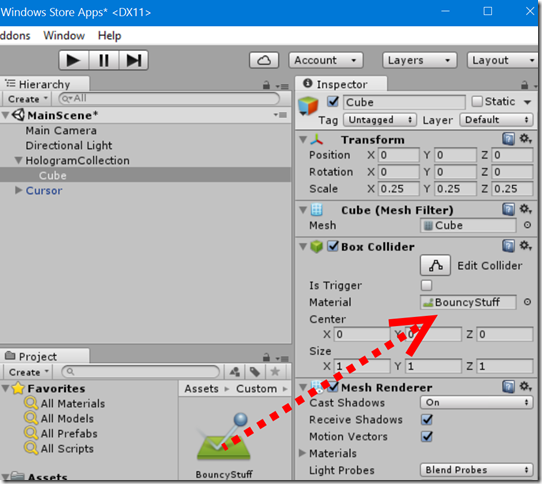 Finally, to make the cube be able to emit sound from the right direction we have to add an Audio Source. You can find an article here on enabling spatial sound in your project. I tend to do things a bit different in this project, because I found it sounded better in my case. Anyway – once more, hit “Add Component” and select “Audio Source”. Expand it, then change the settings as follows:
Net result should be this

Our Cube is now done.


Looking at the result so far 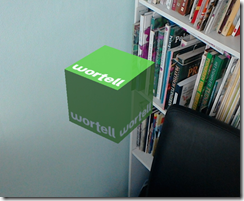 As you may have noticed, we still have not written a single line of code. Yet, we already have a working application. Hit File/Build Settings/Build, build the app and deploy to the HoloLens or an emulator. The “Made with Unity” logo will pop up, and then nothing. Or so it seems. We have positioned our cube at 0,0,0 which seems to be the location of the HoloLens as the application starts up. Anyway – get up, turn around, look to where your head was, and there it is….

The solution so far can be found here. If you are impatient, and want to play with the already finished app directly, download an app package here and install it on your HoloLens. Beware of the dependencies you will need to install as well!
Apart from the people already mentioned in this article, I want to particularly say thanks to András Velvárt (aka vbandi) who, apart from being a smart, friendly and very accessible person, gave me some particular good advice on some issues with the spatial mapping, and the HoloLens environment scanning rate. He also pointed me to the Creative Coding series.