When I work on a HoloLens project, I alternate a lot between the Unity editor and Visual Studio, but I tend to spend a lot more time in the latter. I am a coder after all, and if you set the development checkmarks as I explained in an earlier post, you can directly edit (and more importantly, debug) your code from Visual Studio. After a particular fruitful day I closed off my PC (it’s a desktop PC so yes, it actually shuts down). Next morning I wanted to work on some assets, so I opened the Unity editor and was greeted by this: 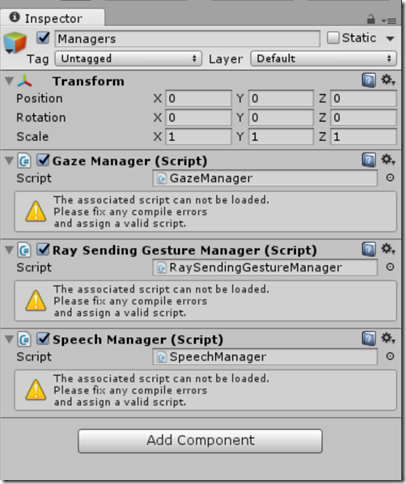 On every bloody script in the project. Even the standard scripts in the HoloLens toolkit by Microsoft were broken. Quickly I opened Visual Studio. No syntax errors, nothing. App compiled as normal and deployed. The only clue was this all the way to the left bottom of the screen in Unity was this very vague error message:

Unexpected symbol ‘<internal>’? All that was on line 95 of CubeManipulator was a simple Debug statement in the OnCollisionEnter method:

What can be wrong with that?

Well, it’s using string interpolation, and that’s C# 6, that’s what wrong with that. While this is perfectly valid in your UWP app compiled by Visual Studio, running on a Windows platform, Unity is built to be cross-platform. It’s particular interpretation of C# is based on Mono and it’s runtime is still a bit behind – at least to the extent that it’s not understanding this fancy string interpolation thingy.So all I had to do was remove this line – and restart the Unity editor, as changing the script alone does not do the trick.

Now I understand Unity is getting a new runtime in the future and this will all be moot in the end but until that moment – beware of fancy C# 6 constructs in your HoloLens apps. If you get any odd error messages in perfectly valid code from the Unity editor – this is your prime suspect.