The MRTK2 allows for development for both HoloLens 1, HoloLens 2 and Windows Mixed Reality immersive headsets with nearly identical code. And a growing number of other platforms, but the focus is now understandably on HoloLens 2. Yet, if you want to make apps with a broad range, you might as well use the capabilities the toolkit offers to run one app on all platforms.

Basically this boils down to scaling and distance. Scaling usually is pretty simple to fix, but distance behavior is a bit more difficult, especially since the MRTK2 contains so much awesome behaviours for keeping for instance a menu in view, but it does not support different behavior for different devices. 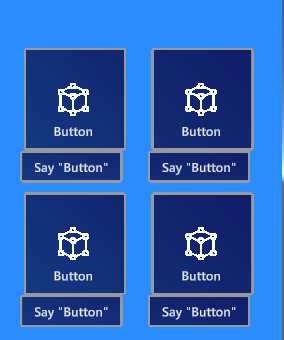 I have come up with a rather unusual solution for this, and it works pretty well.

I made two behaviours that work in tandem. The first one is pretty simple enough and is called EnvironmentScaler.

This simply scales the current game object to the value entered for the specific device type. Notice also there is a drop down that will enable you to select view how platform specific sizes will appear inside the Unity Editor.

The second one is a bit more odd. You see, for determining the right distance, I would like to use the standard Solver and RadialView combo. Of course I could have written a behaviour that changes the RadialView values based upon the detected platform. But then it would only have worked for RadialView. So I took a more radical and generic approach 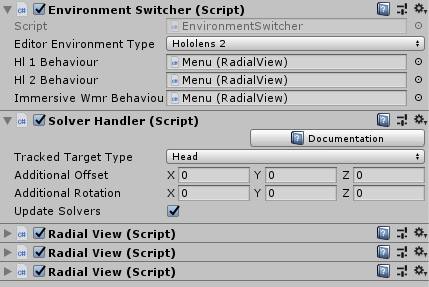 As you can see, there is one Solver but no less that three RadialViews on the menu. They all have slightly different values for things like distance and Max view degrees. An if you start Play mode: 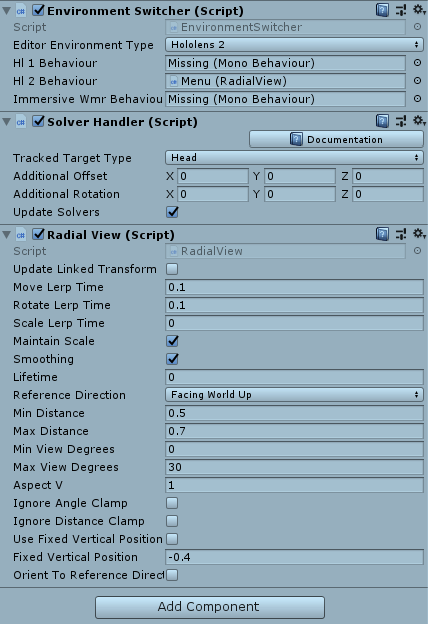 It simply destroys and removes the behaviors for the other platforms. Crude, but very effective. And no coding required. The only thing is - there is no way to distinguish those three RadialViews, so it's best to add them to your game object in the same order as they are listed in the EnvironmentSwitcher: for HoloLens 1, HoloLens 2 and WMR headsets.

The nuts and bolts

Both the switcher and the scaler have the same generic base class:

The GetPlatformValue method accepts three values - one for every platform supported - and returns the right one for the current platform based upon this simple rules:

This is the very simple, as all the heavy lifting has already been done in the base class:

Simply scale the object to the value selected by GetPlatformValue. Easy as cake.

Very much like the previous one, but now the values are not floats (for scale) but actual behaviors. It find the behaviour for the current device, the destroy all others.

The fun thing is - in this I used this specifically for three identical behaviours (that is, they are all RadialView behaviours) - one for every device. But it's just as easily possible to use three completely different behaviours, one for each device, and have the 'wrong' ones be rendered inoperative by this behaviour as well. This makes this approach very generically applicable.

Multi device strategy does not have to be complex. With these two behaviours you can make your app appear more or less the same on different devices, and still adhere to the device's unique capabilities.