Let’s face it – although Windows Mixed Reality has a steady uptick (at least I think I can draw that conclusion from the increasing download numbers of my two Mixed Reality apps in the Windows Store) – not everyone has a Mixed Reality headset, or even has a PC capable of supporting that. Time will take care of that soon enough. In the mean time, as a Mixed Reality developer, you might want to show all 700 million Windows 10 users a glimpse of your app, in stead of ‘only’ the HoloLens and Mixed Reality headset owners out there. Even in a reduced state, it gives you eyeballs, and maybe entice them to get themselves a headset after all. It’s not like they are expensive these days.

Well it should. This is far from original. I have been down this road before, describing how to run a HoloLens app on a Raspberry PI2. That’s the U in UWP for you. Only now we are going to run on a full PC – in my case, a Surface Pro 4. That’s a sufficiently high end device for a nice experience, but it predates the Windows Mixed Reality era by almost two years and does not support it. But you can’t walk around without a headset, so we will need another means to change our view point.

The first point is important – for if you have the portal installed, your PC will launch it like a good boy trying to do the logical thing - and you won’t see the effect I am trying to show you.

Then I added my standard empty game objects “Managers” (with nothing in it)  and “HologramCollection” with a cube and a sphere, to have something to see:

There is more to that two objects that meets the eye but we will get to that later.

There’s a simple class for that, in my ever growing HolotoolkitExtensions, that starts like this

I tend to offer settings to the Unity editor as much as possible - to make it easy to reuse this class and adapt its behavior without code changes. Here I offer some speed settings. You can set the maximal rotation speed and the maximal speed the camera moves, and the ‘speed up factor’ that is applied to all values when the right trigger is pressed. Be advised these are all analog values between 0 and 1, so you can control the speed anyway by varying the amount of pressure you apply to the sticks, the D-pad. But sometimes you just wanna go fast, hence the trigger. Also notice how initial rotation and position are retained.

The main routine is of course OnXboxInputUpdate, as the IXboxControllerHandler mandates its presence.

Let’s unpack that a little.

Important is the if (!UnityEngine.XR.XRDevice.isPresent). We only want this behaviour to do it’s work when there is no headset present whatsoever – no Mixed Reality head set, no HoloLens.

This is exactly the way it works when you use an Xbox Controller to steer the Unity editor in play mode. The D-pad feels a bit counter-intuitive to me, but when you try to move in three dimensions using sticks that move both in only two dimensions, you will need something extra, and the D-pad is the only thing left. It feels odd to me, but it works.

Then finally the B button – when you press that, you get back to your initial position. This is very useful for if you have messed around a bit too much and completely lost track of where you are. And that is mostly all of it.

A tiny bit of SOLID

Hardly worth mentioning, but should you want to add your own logic handling controller buttons or triggers, you can make a child class of this XBoxControllerAppControl  and override this method. It’s a hook that makes it open for extension, but keeps it own logic intact. That’s better than making OnXboxInputUpdate virtual, because that enables you to interfere with the existing logic by not calling the base OnXboxInputUpdate. It’s the O of SOLID. 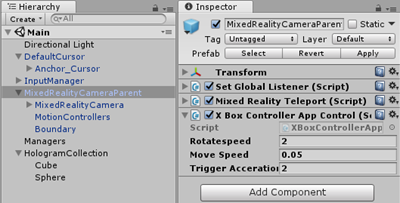 How to use it

Simply drag it to the the MixedRealityCameraParent, change the settings to your liking and your are done. I think I took some reasonable default settings.

I have found the Xbox Controller buttons tend to stutter – that is, they sometimes fire repeatedly and rapid fire events can give a bit of a mess.

So I created this little helper DoubleClickPreventer that is not exactly rocket science, but very useful

It’s rather simple: whenever the method CanClick is called, a time is set. If the method is called twice within 0.1 seconds it returns false, otherwise it returns true. It’s actually used twice within this sample: it’s also on on the little helper class “SelectorDemo” that makes the sphere and the cube go “plonk” and flash blue when you click them using the Xbox “A” button. I won’t go into that – you can find it in the demo project, and it’s inner workings are left as exercise to the reader.

There are a few things you might notice. First of all, I apparently am able to select something, but I never coded for it. That’s courtesy of the Mixed Reality Toolkit – your Xbox Controller’s “A” button is acting the same as saying “Select” in a Mixed Reality app while you are gazing at something, air tapping while using a HoloLens, or pointing your Mixed Reality controller to an object and pressing the trigger.

Also, you might notice this at the end of the video:

A clear sign Windows is not really content with this. It figures – because if nothing prevents you from downloading an app that simply does not work on your machine it might disgruntle users. But still – the app launches and seems to work.

Some other things to notice and take into consideration 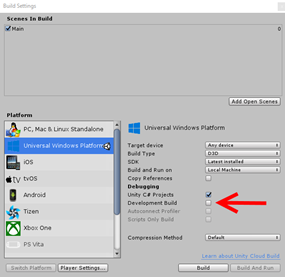 I am not sure if this will continue working going forward with the MRTK and Unity, how useful this will be in the real word, or if that the Mixed Reality team even appreciates this approach. I am simply showing you what’s possible and a possible way to tackle this. Your mileage may vary, very much in fact. Have fun!