“There are three kinds of lies: lies, damned lies and statistics” (Benjamin Disraeli)

There is a nifty little Windows Phone 7 app out there called “…I’m a WP7”, made by a person who calls himself “Liquid Daffodil”. It’s a bit hard to describe what its actual purpose is. It’s got a lot of features: it can show other people using the same app nearby on a map or a list, it’s got a forum in it, you can send messages to each other, you can see who is developer (or claims to be) and who is not, you can see Xbox avatars, it’s got news about Windows Phone, it also shows you in which ‘hive’ you are (I still don’t quite get that) – anyway, if I may name a main purpose it seems to be you can proudly flag you are a Windows Phone 7 user – but only to other Windows Phone users running the same app. Its subtitle is “join the movement”.

That may not sound very useful but there is this one thing – it’s got a little option called “statistics”. It shows how much people are using this app, both worldwide and in your country, and how much are claiming to be developers. I’ve been tracking these statistics for the last 14 days and ended up with the following results: 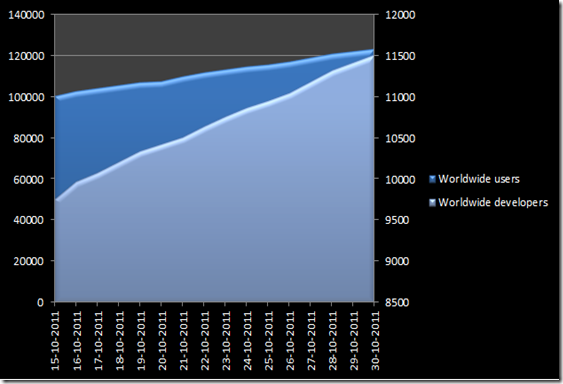 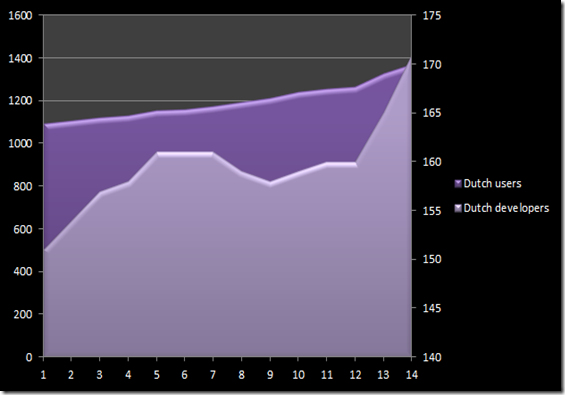 Left axis shows number of users, right axis number of people who claim to be developers.

I only show these numbers, and I leave interpretation to the reader’s responsibility and wisdom. I would like to point out these are the usage rates of a single app over 14 days, from an unverifiable source (which, if they are true, I am very jealous of). There are some oddities in it, like the number of Dutch users claiming to be developer actually dropping and then sharply rising. I show them anyway, if only to show that I am not only sharing things I would like to see. But I would also like to point out that apparently, in only 14 days worldwide usage of this app rose with a staggering 23%, the number of people claiming to be developers worldwide with 18%. For the Netherlands the numbers are 25% and 13%.

So what does this say about the actual adoption rate of Windows Phone 7 as a whole, as I so provocatively called this article? Well, basically nothing at all. How hard is this data? How many % of the total users and developers are actually running this App? How reliable is the developer’s tracking system? Is he telling the truth at all? I can only speculate, and on speculation I got a very good advice from a fellow MVP whose words I tend to take for wisdom, which basically was: “don’t speculate”. It only shows that there seems to be growth – and quite substantial growth, too. If this bears any kind of correlation with the actual growth of the Windows Phone 7 as a platform life will be interesting indeed :-)

It shows another thing: I really s*ck at making Excel charts. My sincere apologies ;-)

For the record, I wish to state that I have not been given insight in any actual Windows Phone 7 usage data. Microsoft is not telling these things, not even to a Phone Development MVP. As to why this is, once again one can only speculate, which I was advised not to do, so I don’t. I just used publicly available data.