The whole point of my previous two blog posts, in which I first described DIY hand gesture recognition, then some way to use that to move stuff along a multi point line path - was to actually lay groundwork for this blog post. Because what I actually wanted to achieve, was something like this:

So what it looks like I am doing is moving a lever by grabbing it. What I am actually doing is almost the same as in the previous post - moving a point over a multi line path. The distance traveled actually correspondents to how far on the animation timeline the animation needs to be.

In this video where I turned on the run time debug it may become a bit more clear what is actually happening behind the curtains:

In SampleScene2 you will find a prefab Lever1. If you select that in the hierarchy, then click Window/Animation/Animation you can see the actual animation. I have defined a simple animation called “LeverSwitch”. In this case a simple 24 frame animation that rotates the lever forward. The image shows it about halfway. 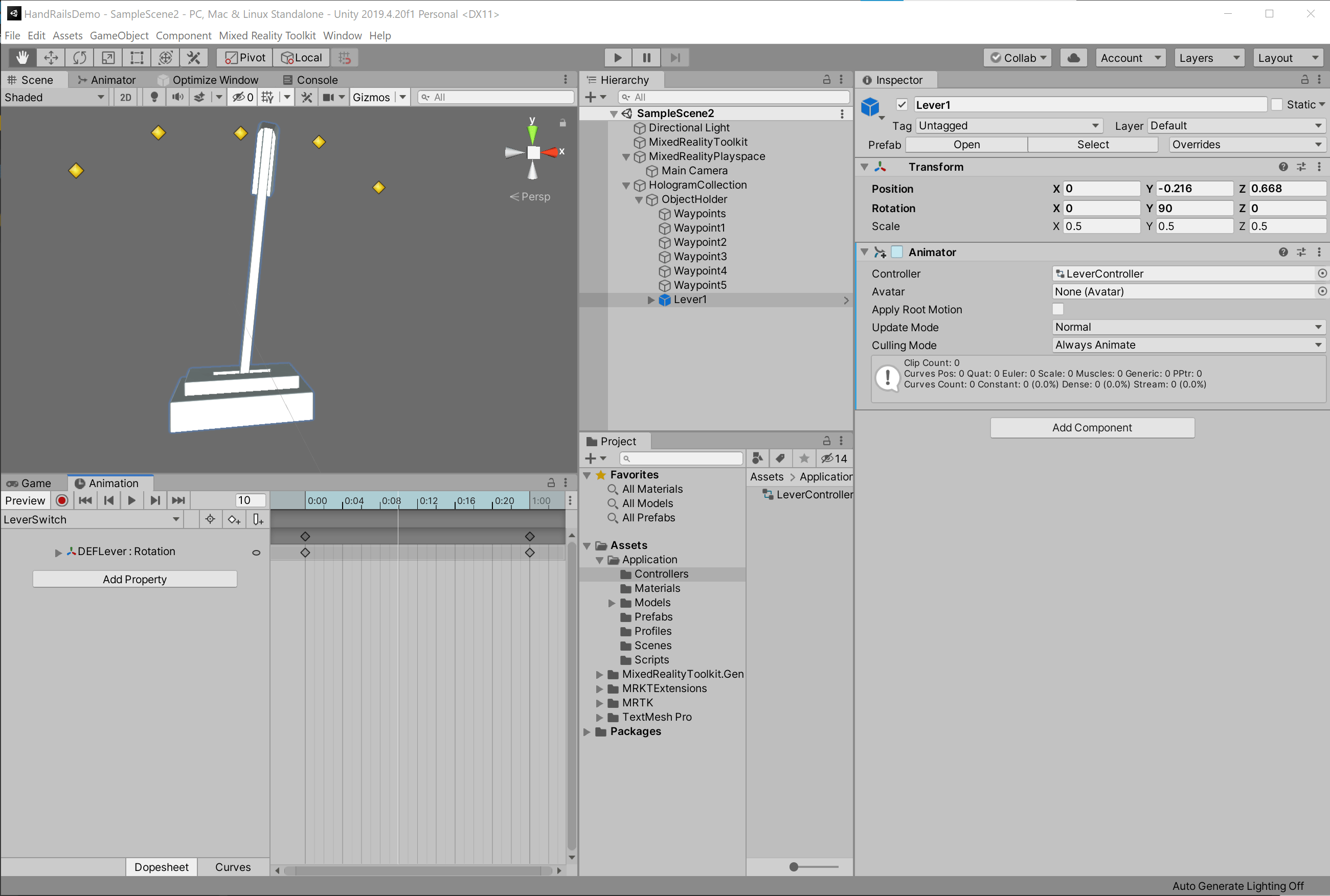 Notice the five way points that more or less show the arc the top of the lever should follow. This has nothing to do with the actual animation - this is the road I want the hand that moves the lever to follow.

You can also see there’s an animator LevelController. The file for that sits in Assets/Application/Controllers. This is the animated object’s state machine. If you open that file and click Window/Animation/Animator you will see this: 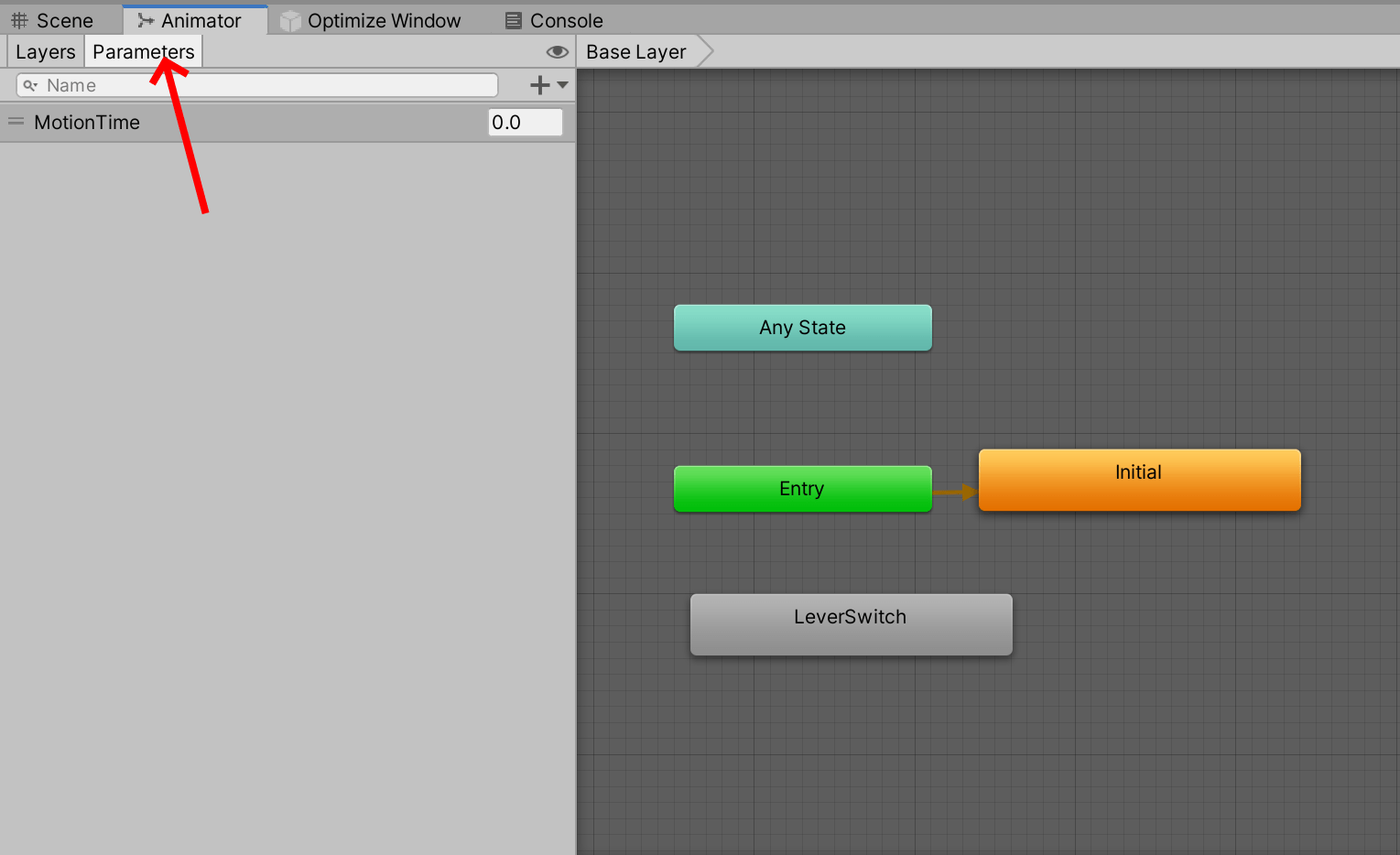 Important is that you click the tab “Parameters”. This is where you can set parameters to the animation.

Parameters can be float, bool, int and trigger. As you see, I have created float “MotionTime”. Interestingly, if you double-click the state “LeverSwitch” you will see that it actually controls the animation LeverSwitch.

Now that we know this, we can actually interactively control an animation from code. And this is exactly what the next part is about.

Controlling an animation from code

With all the groundwork we did in the previous blog posts, controlling an animation is as simple as this:

And the animation layer, which can remain 0 now for the purpose of this blog.

We already had a DistanceTraveledAlongPath extension method that told us how far along the line we have traveled. Divide that the TotalLength of the path, and then we have a number between 0 and 1 that we need to apply to the animator.

The stuff above was basically the meat of the matter. For a simple animation, following a simple path like an arc, you can simply align the path with the animation using just the editor with the gizmos options I added in the previous blog post. If you need to align hand movements along a longer or more complex path, you might want to check in 3D - that is, looking from you actual HoloLens 2 - if the path you make the hand follow actually aligns with the path of animation. To this end, I have extended HandRailsBase with run time debugging options:

This little method, which is now called from the tail end of OnEnable, draws the multi segmented line the hand should follow in the air: 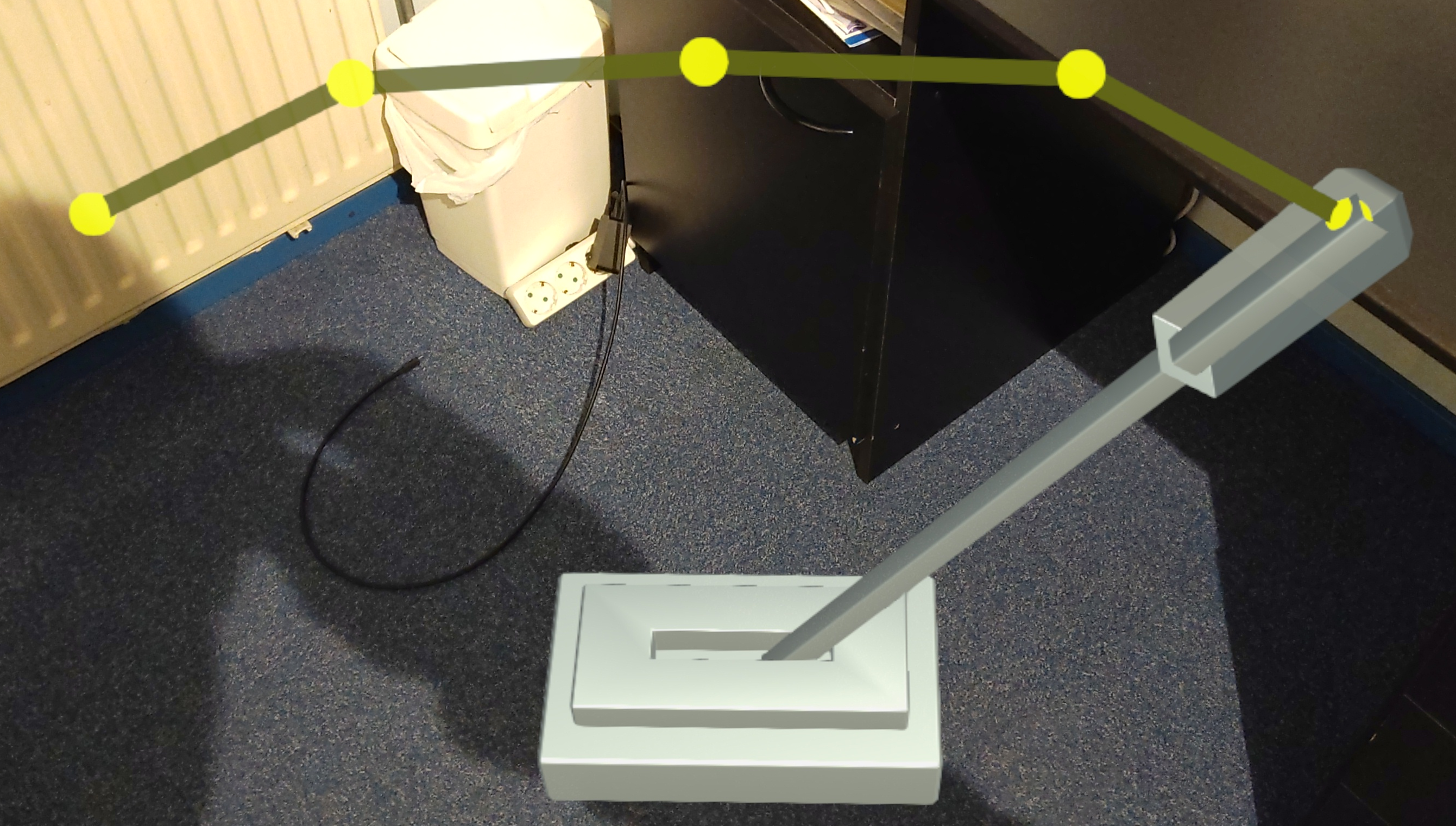 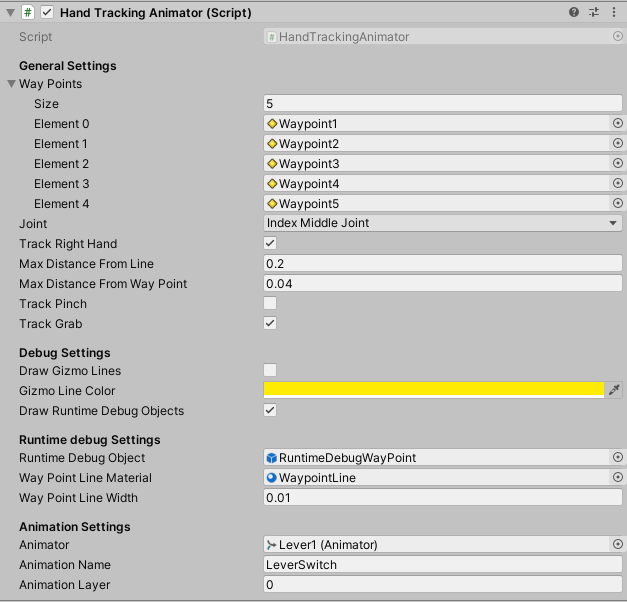 Note in the configuration above you can only move the lever by grabbing it - pinching does not work. If would want pinch to be included in the recognized gestures, simply tick the check box.

I didn’t know you could actually control animations with a motion time parameter, and credits for showing that to me, as well as coming up with the idea of using a hand position to control animation progress in a simple 2-point-scenario go to my esteemed colleague Timmy Kokke aka Sorskoot. After that I went a bit berserk and greatly expanded on the idea to create a reusable standard solution for multi line segments.

You can download the actual finished project with all components here. The hand controlled animation sits in SampleScene2.