I was (and am) very excited about the HoloLens 2 hand tracking capabilities, and was intrigued by the MRKT2 Hand Physics Service. Yet I quickly found out that service has some limitations: although it’s a great way to detect whether or not things are touched, it’s capabilities for actually manipulating stuff is limited to low speed interactions.

The Hand Physics Service basically attaches a collider around your hand (on finger), which you can use to push holograms a bit around and then let Unity colliders do the work. An elegant solution, but if you try to smash to swat a hologram, you will basically smash right trough it. The hologram halfheartedly moves a little with your hand, but it’s not like it moves away like you swatted a ball or something.

And went on to actually build it. Meet HandSmashService, an MRKT2 extension service just like the Hand Physics Service, but then for high speed interactions - specifically, swatting holograms. For this I reached way back into my own blog, to one of my very first HoloLens apps, the CubeBouncer, from which I borrowed some principles - specifically how to apply directed force to holograms - that I learned in (checks notes) July 2016. Wow, time flies when you are having fun. 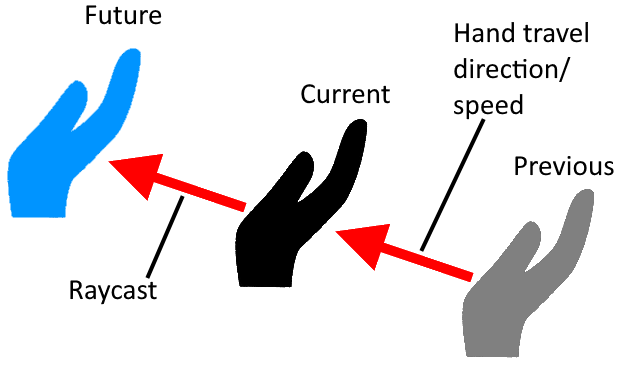 The result you can see in the 2nd video above - a more realistic response from something that’s swatted away.

The first part shows the general setup of the HandSmashing Service as a MRTK2 extension service. Basically the only thing noteworthy is the fact this shows it’s piggybacking onto the standard MRTK2 Hand Joint Service:

This method is called every frame, so 60 times a second (if your app is running properly, that is). It does not show much, apart the ApplySmashMovement method is called for each hand - and that the result is retained

Now it gets a bit more interesting. This method checks if the current requested hand should be tracked at all according to the settings in the profile (see later), and if so, it actually gets the palm position. Upon securing that, it passes both old and new hand positions to TryApplyForceFromVectors which is where the real action happens

This is the heart of the matter:

This is the concrete implementation of the principle I described above. This method

Effectively the object is pushed aside as if it’s swatted away.

You might notice some values from the profile being factored in along the way. These are values you can set to tweak the process and are explained below:

I think this is a nice addition to the rich set of hand tracking features the MRKT2 already features. This is meant to be part of a little game I was developing for HoloLens2 just to explore a few avenues I haven’t been able to explore so far, but well, it’s been a bit busy so this kind of has been sitting on the shelf for a while. You can find it in this demo project if you would like to play with it.

Short Unity tip: apply changes made in the scene to a prefab

Common problem: you have created a prefab which you want to modify. Of course you can open the prefab and edit that, but when you want to edit a prefab in th...

A common annoyance and mistake: the only way to position an object on the correct place, in the correct scale and/or rotation in Unity is in play mode.

If you are developing Mixed Reality apps with Unity, you often create code that only works in the editor, to simulate test conditions - for instance, a keybo...

One benefit of writing model driven Mixed Reality apps, as I demonstrated in this and this post, is that you are using a consistent architecture that makes i...