QR codes are a great way to input data into Mixed Reality apps. You can simply hold them in front of the device you are wearing and the app can read the data directly from it. Much easier, faster and less error-prone than typing, even on the awesome HoloLens 2 keyboard. These codes can hold quite some data, and HoloLens 2 comes with the native capability to read QR codes. You can actually test this by holding a random QR code before your HoloLens while in the shell (that is, not running any app) 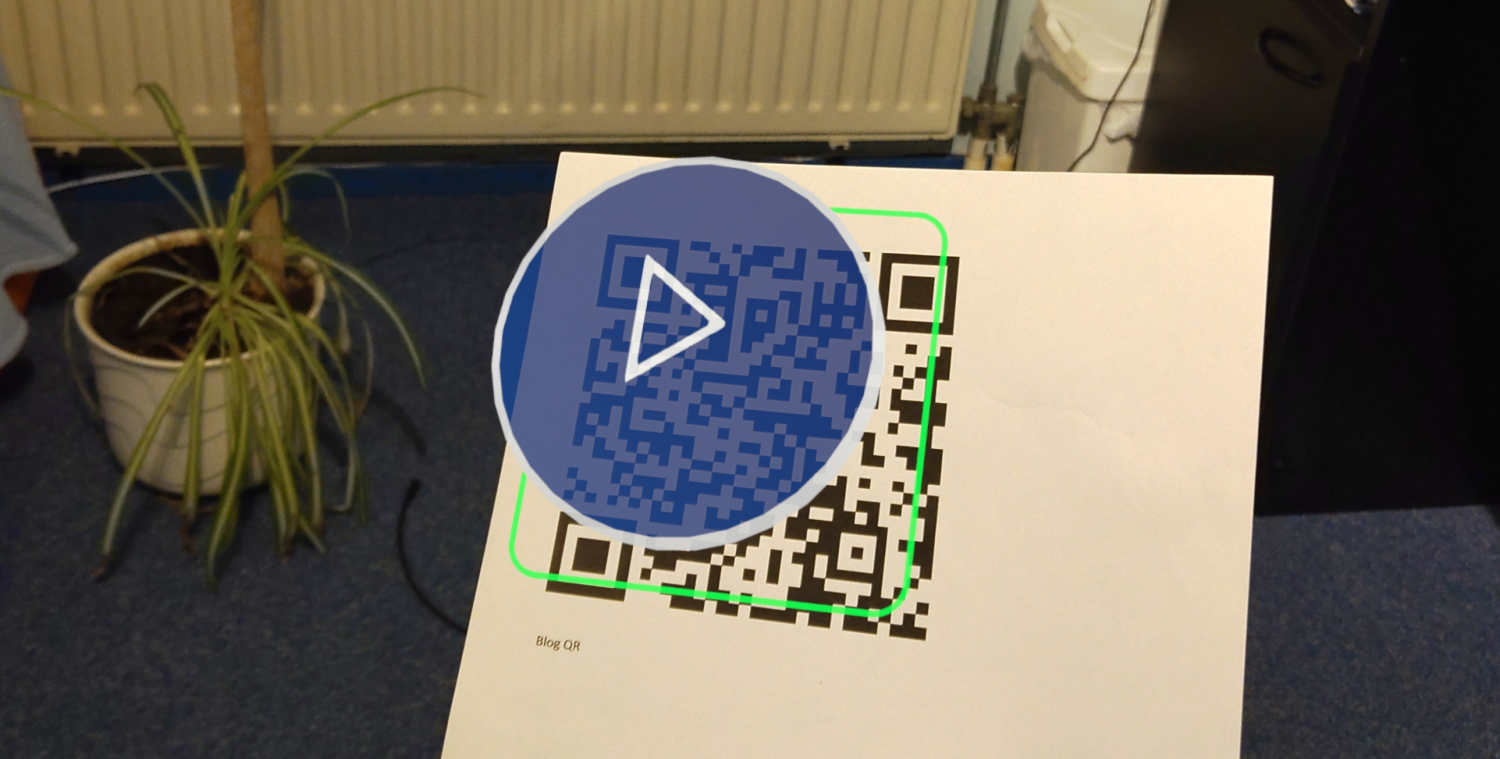 If the QR code contains a web link, it will even show a kind of “play” button on top of it. If you press it, it should open the web link. As you can see it not only is able to read the QR code, it also knows its position in space. This allows you to build a poor man’s Vuforia - using QR codes in stead of VU markers. With the added benefit that it’s a built-in capacity - and thus, free for any (including commercial) use.

There is documentation by Microsoft explaining how to set up things. It points to this sample. It may be just me, but I found article and code a bit hard to understand. To understand what’s going on, I dissected the code. And as am I called an ‘architect’ these days, of course I had to put it back together again in another form ;) - both to make it more understandable for myself and hopefully for you as well.

This blog will be in two parts: the first part (this one) will describe how to read QR codes and process the data. This is useful if you only want to use QR codes to easily input data in your app. The next article will concentrate on the positioning of QR codes in space in a way that makes sense (to me) and closely resembles the way Vuforia works.

A behaviour using the service to show the internal working of QR tracking (useful for debugging purposes, and a behaviour that actually reads and displays QR code payload - close to what you would want to do in real life - as demonstrated in this video:

After I created the project, I changed the platform to “Universal Windows” and I proceeded with: 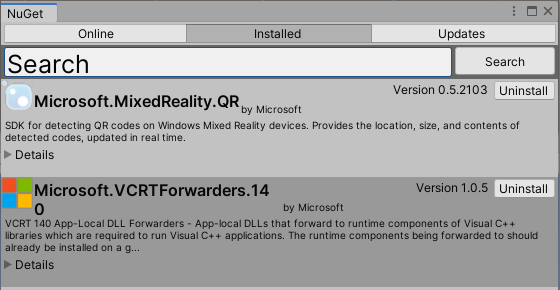 Finally, of course, I added the MRTK2 to the scene - using the drop down menu in Unity that appeared after we imported the MRTK2. The project is now ready to be set up.

The intention of this service is to be a simple wrapper around QRCodeWatcher, the class we got access to when we imported the Microsoft.MixedReality.QR package. This class has some peculiar properties. First, it uses the tracking cameras to read the QR code, and not the webcam - unlike Vuforia. This allows you - also unlike Vuforia - to actually stream or film the actual process of acquiring and reading without the webcam being hijacked and the stream or movie being stopped.

Since the QRCodeService is an MRTK2 service, it needs to implement a child interface of IMixedRealityExtensionService. Our interface is called IQRCodeTrackingService:

Note, also that IMixedRealityExtensionService descends from IMixedRealityService. From this interface we inherit a couple of other methods, from which we are going to implement the following:

After the public events and properties, which I already described, you see a couple private fields.

This is decidedly a weird piece of code, which may come from the fact that I try to run it as a service.

What happens here is:

I have not been able to find out why this is necessary in this context, but it solves a problem at very first app launch. If you put QRCodeWatcher.RequestAccessAsync() in MonoBehavior (like in the sample), the camera consent popup appears and the task is blocked until consent is either granted or denied. In a service, the task stays blocked no matter what, even if you give consent - the code will never get access. You will then only get access when you stop the app and start it again after granting access at the first run. So I made this little weird thing that restarts the asking for code in the app itself..

AwaitWithTimeout, is a little extension method to Task, that I nicked from Stack Overflow and adapted it to make it able to pass a parameter. It looks this:

Mind you, this whole timeout-and-try-again thing is only used the first time you run the app - when it needs to get consent. Once it has it, is sails right trough it the next time.

The next three methods actually set up and enable tracking:

ProcessTrackerCapabilityReturned is called when access is successfully granted or denied, but at least is no longer blocked. It only sets the field accessStatus to the parameter value it got supplied. The Update method then, that is called every frame just like in a MonoBehaviour, checks accessStatus and if the qrTracker is not yet initialized. In that case it, creates the tracker, connects to its Updated event and does some housekeeping to notify the outside world of its status.

Note, I only observe the Updated event. There are also Added and Removed events in the QRCodeWatcher but I have not been able to reliably make use of those. Basically Updated is (continuously) being fired as soon as the QR code comes into view.

Notifying the outside world

Little code, but still something more to tell about it:

Seems like it’s only logging the payload and then passing it on. Which is more or less the case, but for one detail. We don’t send a Microsoft.MixedReality.QR.QRCode to the outside world, but our own QRInfo. This has exactly the same properties as QRCode and the constructor simply copies the properties over one by one.

The reason for this is that after long debugging, I have ascertained that you apparently don’t get a new QRCode instance when a QR code moves (or your head moves), but a reference to the same one over and over again. I presume for the sake of efficiency. This is all very nice, but if you want to compare a location or the LastDetectedTime with a previous occurrence, you will find the properties are always the same. This is, of course because the new occurrence references the same object as the previous one. In my code, I need to actually be able to compare the previous occurrence with the current one. So, we create our own object, wrapping the data of the internal event object and bypassing the issue of the re-used reference

Overriding the standard Enable and Disable methods of the service’s base class, we simply start and stop the tracker and do some housekeeping

Notice the service will be active but not actually doing anything before its Enable method is called!

What’s left now are some logging methods you can view in the demo project.

So that’s the service. It should be configured by a QRCodeTrackingServiceProfile that has three properties: 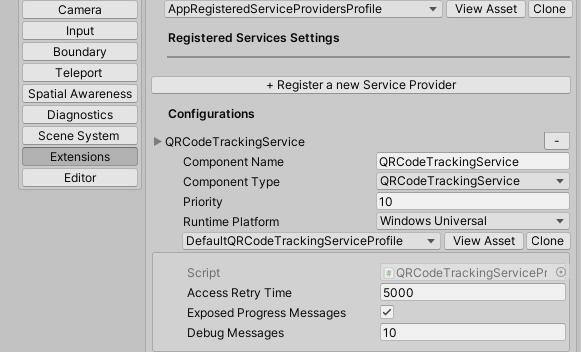 Using and enabling the service from a behaviour

Here you see the typical pattern from top to bottom:

In the demo project, in the HologramCollection there are two game object that can show off the service in action. 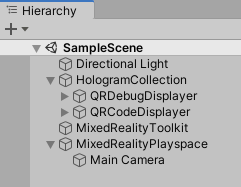 Preferably you don’t activate them during the same run or they will show on top of each other, and probably make you cross-eyed from looking from one to the other. The first one is QRDebugDisplayer, which is controlled by QRTrackingServiceDebugController. This basically only dumps the progress messages on a floating screen. It does not even listen to the QRCodeFound event. This is the behaviour shown off in the first part of the video above

The second game object, QRCodeDisplayer, is controlled by QRCodeDisplayController and is a bit more interesting - for instance, it only shows its UI after the tracker is successfully initialized.

Also, it displays the QR code payload and plays a sound only if there’s a code detected different from the last one.

And even more so in the update method. If the last seen code has not been seen for qrObservationTimeOut milliseconds (in the demo project 3500 ms) the app will clear the text from the screen and assume it to be a new code again (and thus play the sound again). This shows the use of using QRInfo in stead of directly referencing QRCode, so we can actually perform this timeout check.

QR code reading has it weirdness-es, but I hope I brought a bit more clarity into this. I also hope to have provided an easy to deploy, configure, debug and deploy object. Those who want to read my blog using their HoloLens 2 can use this QR code ;) ‘ 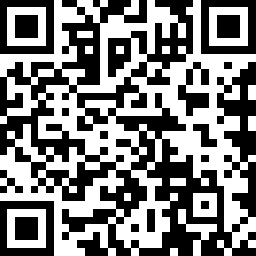