On September 6 2022, fellow MVP Zaid Zaim, who is also busy with MRTK3, mailed me with to ask me if I thought MRTK3 apps could run on phones as well. I had to admit I didn’t really know, but that promptly got me yet another side project (like I didn’t have enough already ;) ) because I had to find out now. I have an Android phone, and since the Quest 2 runs on Android as well, how hard could it be?

So close, yet so far

So I took AMS HoloATC, that I recently showed off running on the Quest 2 without any code changes, and deployed the Android version to my phone. The good news was: deployment worked. The bad news:

The best news: I could work around all those issues. There is a way to make MRTK3 apps run on a phone and have them do all the things I listed above. To demonstrate how I did that, I made a little demo app, that runs both on HoloLens and Quest 2 - and now also on a phone.

This simply shows a kind of field, that moves into your view, tracks your head movement and tries to align the ‘field’ to your head. If you do a raw air tap, the field stops moving and six red cubes appear. If you gaze at a cube, it will display a green sphere on top of it, and if you touch a cube or air tap while pointing the hand ray at it, it will turn blue. It’s a rather weird and artificial looking app, but it’s showing all the things I had to tackle to get AMS HoloATC to run on a phone, with some proper interaction.

Apart from some stuff from my MRTKExtensions, which I have already have migrated to MRTK3, there’s only two custom scripts to consider: TapToPlaceInViewDirection, that basically makes sure the ‘field’ stays in view where ever you look, and rotates it to it points to the camera while staying horizontal - until you do the raw air tap. Not very sophisticated, but it does the trick. I won’t go into very much detail, but it sits in Managers and uses my MRTK3ConfigurationFindingService to detect hand gestures. Below is an excerpt:

If an air tap is detected, it basically disables itself so the field stays put. The other custom script is TestObjectController

This sits in each of the TestObject prefab, changes the color when Activate is called, and shows the green sphere when GazeActivate is called. To have these methods called at the right moment, I have added an MRTK Base Interactable to the TestObject, and configured the IsGazeHovered and the Select events thus: 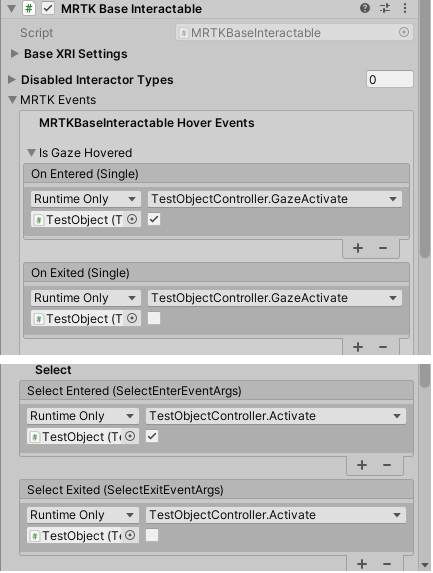 And that’s it. The app itself is very simple, neither very useful nor attractive, but it fulfills it’s purpose - showing what needs to be done to get this working on a phone. Let’s go!

Disable the Vulkan graphics API, in “Other settings” 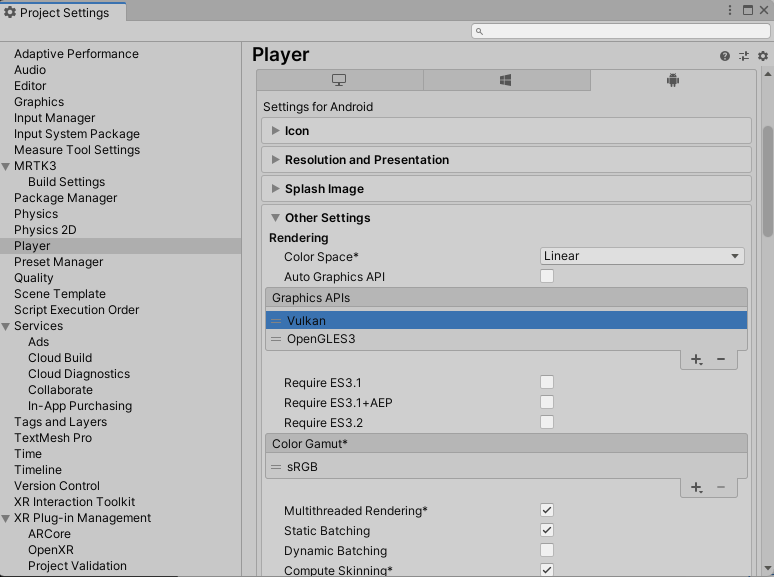 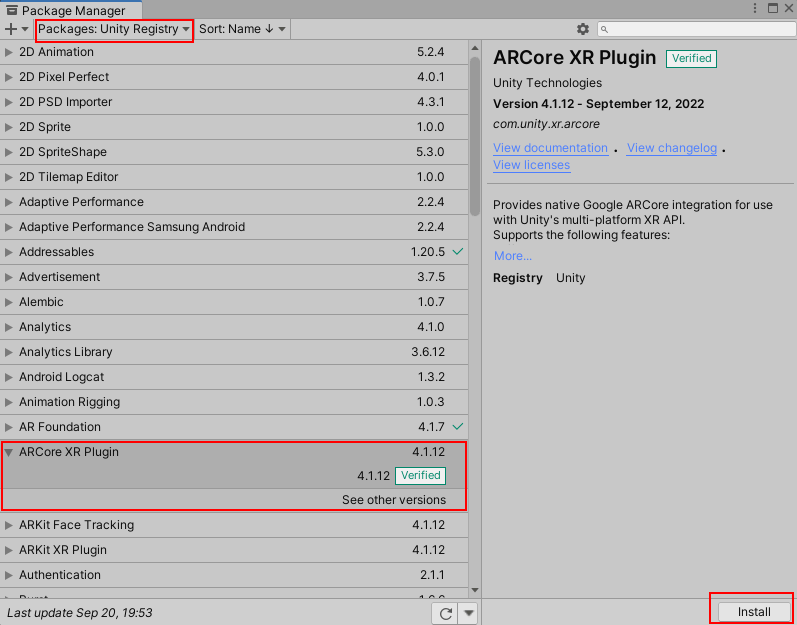 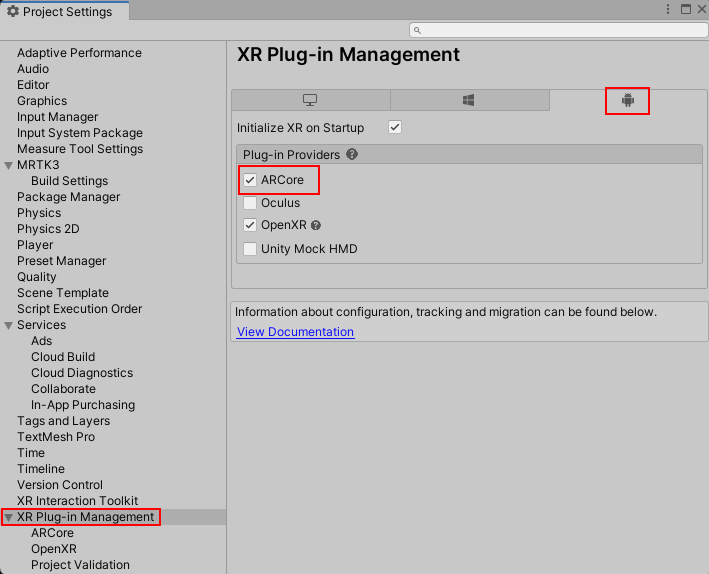 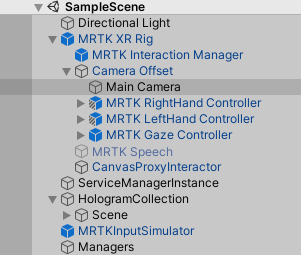 If you go to the Inspector, at the bottom you will see the Tracked Pose Driver. 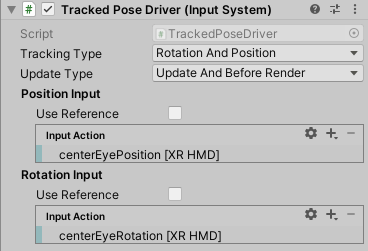 This now will need to track device position and device rotation as well. How to set this, can best be explained in this very little animation:

Add AR Pose Driver AR Camera Background to the Camera. The last one automatically adds an AR Camera Manager to the camera as well, which is exactly what we need: 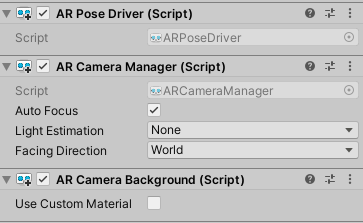 This is very easy. Right-click in your scene hierarchy, select XR/AR Session. 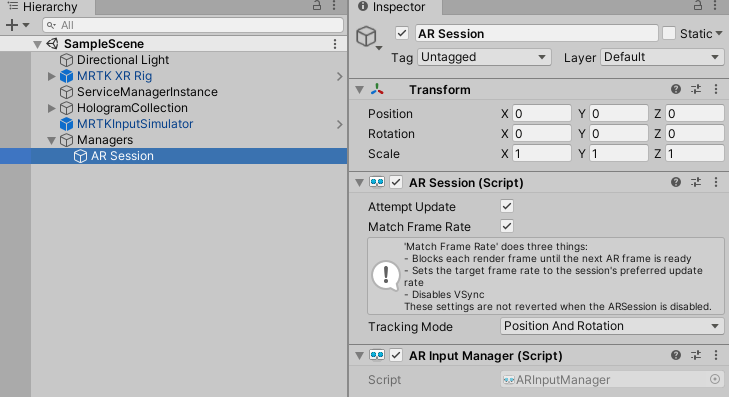 Unity creates it in the scene root, I moved mine to Managers. At this point, when you deploy to your phone, it will ask for permission to take photos and videos, and if you do, it will show the ground plate showing over the background of reality - and it will move and rotate with the camera as you move and rotate your phone, just as in a headset. So now we have a proper AR application. But there’s no interaction yet.

Select the Configuration folder in your assets, click Assets/Input Settings (all the way to the bottom) and call the file TouchInputActions. Double click the file. Then,

Now we need to define a touch screen input action. On a flat screen, that is (of course) a Vector2. How this is done, is also best explained in this little animation: 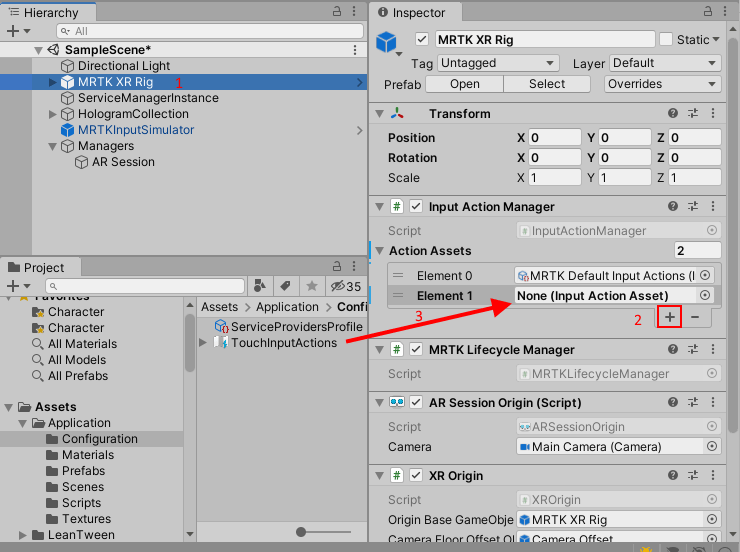 Intercepting a tap on the screen

Going back to my simple TapToPlaceInViewDirection, we add a serializable field:

In the Start method, we simply add:

Now, if you tap your phone’s screen after the ‘field’ is on the location you want, you hear the familiar ‘pringgg’ sound that I have been using as confirmation sound since my very first HoloLens app. The ‘field’ stays put, the cubes appear - and not only that. If you point the phone to a cube, you will see the green sphere appear. Dig this - once your AR camera is tracked, ‘gaze’ works out of the box in MRTK3! But, how to select seprate objects? We don’t have any hands to work with. We can only tap on the screen.

I have no idea if this the best way to do it, but it is certainly a way to do it. I have used something like this before, about 4 years ago when, I had some very basic version of AMS HoloATC built directly on ARCore, but that required a lot of hack and slash work. This is much simpler. The basic idea comes from this Unity tutorial, although I had to find out how to do this using the Interaction Toolkit

When we defined the Touchinput action, it was defined as a value of Vector2. Thus, the tap event includes a Vector2 value - the screen position - that we can read from the callback’s ‘context’. The interesting thing is: CameraCache.Main.ScreenPointToRay(touchPos) then generates a 3D ray from your 2D touch position parallel to the view direction of the camera - so you only have to do a Physics.Raycast with that ray to see if any collider is hit by that ray, that is - if the user has tapped ‘on the object’. If so, the code tries to find an ITapRayCastActivatable in either the object itself or it’s parent - and then calls it’s Activate method.

ITapRayCastActivatable itself is a dead simple interface

So the only thing left to do is make TestObjectController implement ITapRayCastActivatable and add this code:

and we are done. Tapping on the screen ‘on a cube’ now works as a kind of toggle - a tap turns the cube blue, the next tap red again, etc. It actually runs on my phone, at about 6 seconds in you can see the shadow of me holding it ;)

UPDATE: and does it still work on the Quest 2?

The first question I got, when I talked about this with a fellow MVP, was: “will it still run on Quest 2 after all these changes?” The answer is no. If you deploy it as-is, the answer is no.

However, if you follow the following procedure, it actually will: 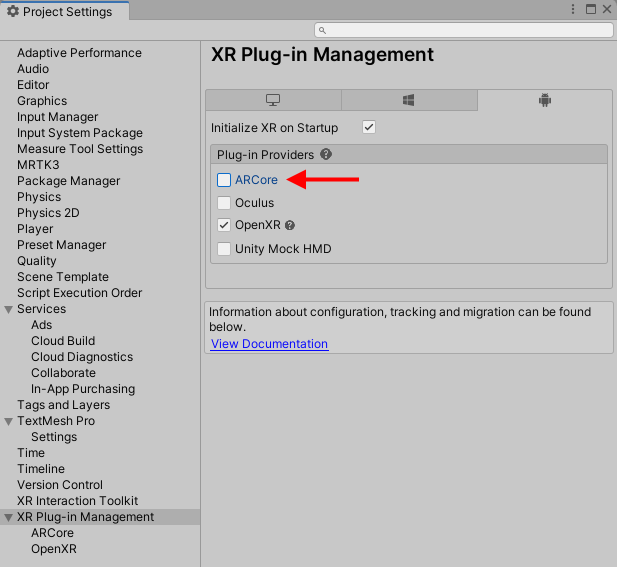 And that is all. As you can see, MRTK3 is pretty flexible, it even runs on ARCore. To say I am suitably flabbergasted is an understatement.

As always, there’s a project to go with a post like this. You can find the resulting code here.. If you want to have the starter code (the app that runs on HoloLens 2 and Quest 2), have a look at this branch.

Now I eagerly await comments telling me stuff like this can be much easier/nicer/better etc ;)

Some people might start to think I am becoming a bit obsessed with the subject of air taps, as this the third post about this subject in two months. First I ...